Our PAYDAY 2 trainer has over 39 cheats and supports Steam. Cheat in this game and more with the WeMod app! 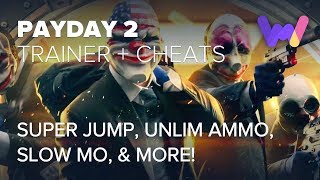 ConfusedOogway 26 Jul
took a while to get some of the things to work. had to host a lobby for them to work and to have unlimited equipment i needed to have selected equipment in 2nd slot to work but otherwise had good experience.

asiann 23 Jul
It was fun using it but then I eventually got boring in my opioin but it's amazing for people that want something really badly. I prefer to make the keybinds for apply shift+f1 and hold it down so it can give you all those stuff.

seanld444 7 Jul
Took a minute to find out that you actually meant to enable the options while playing the game, and not to load the game and then exit to the menu and enable them. Works well though. Thank you!

HonestDeer260 6 Jul
It works and you do not have to go into a crime net offline mission to add the levels and money you can do it on the main menu then you go into your inventory when you leave your inventory it will work.

RockyTheK9Dog 6 Jul
I don't care that I cheated in PayDay.They don't care about it until you DDoS. So yeah, I cheated, admitted it, and had fun. Thanks for making THIS free. THIS IS GOOD.

DefiniteBike914 29 Jun
Many thanks for providing this type of service for free! Makes me realize that their is good people in this world... The interface is very friendly and it looks sharp, the mods work like a charm. Overall it's a great product and I'll be looking forward to paying for the pro version of it! Thanks again for your hard work and love to games!

Baileys49 27 Jun
These are great, thank you - was wondering though, which cheat makes the game hold onto the items, as I don't choose unlimited equipment, but the game won't let me pick the saw up as it says I'm still carrying one - many thanks

UrgentStar186 16 Jun
Thank you~ I'm glad to know that the times where I pressed the " :( " where actually just me being an idiot and not the trainer. I would press [shift] not [ctrl] hahahahhahaha!

ChaosArmageddon 7 Jun
This is very easy to use and works very well. I had to restart payday since I came to PC and this helped me get pretty close to where I was on console. Keep up the amazing work

IntenseStranger407 22 May
The mods is very nice, but my payday 2 keep trashing, do not know is payday problem or mod problem that is outdated since it has alerted me some feature not with current version of payday 2.

zoozoopro 14 May
Thanks, I had a great time spam clicking a sawed-off down federal officer's gullets. The only downside is that I didn't know that you get the 100 continental coins after a heist so I spammed it expecting something to happen causing me to have to leave payday running in the background collecting coins for a whole day. At least I now have close to 100k continental coins.

theswaggindragin 20 Apr
This is very great experience I love it a lot I just have a singular request Can we maybe talk about a mod that disables ai in the sense lets say i am doing a heist this mod would function as if I could not be detected at all.

Lunarieen 20 Apr
While it sucks that you can't use WeMod while having SuperBLT and BeardLIB installed onto the current game as it causes the game to crash upon startup, using this software without it does make the game ten times easier on parts that would otherwise take me literal months to complete on my own.

AngryOnion939 16 Mar
It was awesome and really fun i do wish some of the trainer options where available to me cause i don't have the VIP but what can you do am i right any way really awesome trainer thanks :)

Arnud 23 Feb
I am grateful for the cheats, thank you very much for them. Won't this "say thanks to the developer" message box just bloat the system though? I think a thumbs up would be better. Less system and code bloat too, yes?

EndedReality 22 Feb
e. really great game. bcuz of the new update, i'd say infamy points is useless. overall works great. just not sure about explosive bullets, i cant even tell if it works. again, great trainer

PreSynced 22 Feb
really cool and nice. Helped me a lot with all those guards coming at me and just spraying and i got to pick them off a lot easier than usually Thanks to the developer of this cheat! :)

SweetRock613 7 Feb
this trainer made it so much easier to get back up to where i was in the game before, i used to play it on xbox but dont have my xbox anymore, so this trainer allowed me to get back to my previous level and get back my weapons.
END_OF_DOCUMENT_TOKEN_TO_BE_REPLACED