Our Crusader Kings III trainer has over 17 cheats and supports Steam and Xbox. Cheat in this game and more with the WeMod app! 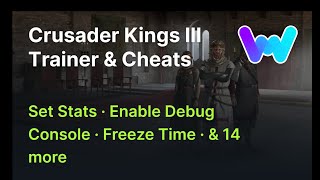 Dominus_Mors 28 Mar
Allows for achievements while still having mods. This game is too hard to play casually so I like how this makes it feasible.

kedari 27 Mar
Thank you so very very much! I'm a subscriber and love supporting such an amazing service! You all turn frustration back into fun :D

GoldenPotato978 8 Jan
I must say, you guys do really good work. Tracking down trainers from various websites is such a crap shoot, as sometime you get bloatware or viruses. Wemod is pretty much perfect. Thank you so much. Your effects are appreciated!

LivingCoat462 27 Dec
i loved it. it helped me learn the game without the giant learning curve. then it helped me just goof around :D thanks guys and gals!

ImprovedBanana216 15 Sep
if im being honest i just use this to enable the console, which can do anything i would need a cheat menu to do.

OriginalShade102 11 Aug
Been downloading Mr Antifun's trainers since prior WeMod. Guy's a legend. Thanks, for another beautiful mod.

Blackburn919 3 Aug
Awesome stuff with this trainer. Would really wish for a instant faith and culture conversion if possible.

SensibleLobster107 21 Jul
Works great but can you figure out how to get around the ironman checksum modification? Would be interesting to be able to use console on ironman without it breaking the save. Thanks for all you do!

SupremeCheetah948 27 Jun
Great mod. Would it be possible to add some type of "God mode" where you automatically win battles no matter the size/strength of the army?

Remianen 13 Jun
Trainer works great, even on a later version. It would be nice to have additional functionality (i.e. Men At Arms editing, levy editing, etc) due to changes to the meta but it's great in its current form.

TheGreenLeaf 11 Jun
It's great stuff, I've wanted to play on ironman mode for the achievements, but never could get them since, well, I like to use the console commands, which modifies the checksum. But, thanks to WeMod, it lets me enable to console without changing the checksum, letting me cheat AND get achievements!

PopularMonkey534 22 May
Thanks! enabling a console is a game changer! but how to enable max country control... didn't figure it out.

StrikingPlate24 17 May
Great! Thanks for this effort. I have always been a huge fan of MrAntiFun. I would like to thank him. Unsure who the dev is for this trainer, thanks to the dev as well! o7

IcyBanana183 18 Apr
Thank you very much! This has allowed me to enjoy the game more and play various styles without spending excessive amounts of time on accumulating renown

ugumbugum 22 Mar
I am really grateful you made this mod. I only ever use the Enable Console feature, but it allows you to use the console on games with Achievements available. Makes a daunting task manageable.

Layski 20 Mar
there is a retreat bug going on with my game i don't know if its because of the trainer or just game but when one of my armies is defeated retreats but doesn't reach it destination no matter how long i let the game run.

ShyGuy1530 6 Mar
Your team does great work! I can always trust the Wemod group to deliver top notch specialized gaming. keep it up guys!

CowabungaDude85 25 Feb
Thank you for the in-game cheats! As I was playing I thought to myself what's missing and a light bulb rings over my head. Why not add a simple raise 100k troops or something similar? Just some food for thought IF you wanna add it for the people that want to get the Domination vibe. Thanks again!

grimhorner 25 Feb
you bring new life to old games and after 12 hours of work, a lil boost in some games to get started thank you for the fun
END_OF_DOCUMENT_TOKEN_TO_BE_REPLACED