Our Red Dead Redemption 2 trainer has over 11 cheats and supports Steam, Rockstar Games, and Epic Games. Cheat in this game and more with the WeMod app! 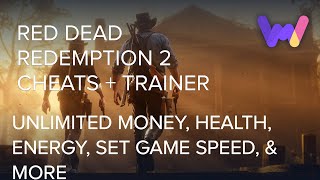 LikelyCheese953 23 Jul
Playing RDR2 on the PS4 is a blast, but I have to admit playing on PC with WeMod behind me in the background makes for a more relaxing gameplay, and I love that because I don't have to worry about being killed in the middle of a hunt or while I am fishing! WeMod, thank you guys for all the things you do!

AmplePancake101 9 Jul
Thank you for doing such a great work. Your software is easy to use and provides help for a lot of my favorite games. I have a friend with a physical handicap who would not be able to play this game unless he had the advantages offered by your trainers. God Bless You!

Nellyvylle 17 May
Great job. I'm playing on pc for the first time and I must say that using wemod while playing through the story make the game more fun and less stress than playing without wemod on my PS4. I don't even want a PS5 I'm sticking to PC and now that wemod exists I'm sure a ton of my story based games will get replayed. So keep it up wemod and Thank you.

ProperWorm584 2 May
thank you. it's nice to be able to play a game the way I want to play. the asking to upgrade to pro on everything is a bit annoying but otherwise this is a great mode. the money mod is a bit wonky but works kind of as intended.

ModernYam843 28 Apr
Waiting for the update. Seems some of the cheats are hit and miss. Unlimited Dead Eye doesn't seem to be working. Thanks for the great work on this though. Can't wait for the updated cheats.

Modded_Tortoise 11 Apr
cool mod and good replacement to lenny's trainer that mod is a bit more harder to install and use and i prevented me from continuing the main story, but lenny's trainer has more fun things like spawn animals, spawn npcs, teleport to waypoint/teleport to location, give weapon, etc, i hope this mod could add more so i could really compare to the trainer i mentioned

DTMB0525 26 Mar
very fun to just grind out missions without dying and also fun having a lot of money to do things with in the game one thing that i would say i kind of don't like is that there isn't a no wanted level cheat like in gta i would be very happy if that were to be added thanks!

MagicalLeaf252 3 Jan
ive always played red dead 2 on the xbox a long ways back, ive always enjoyed it but now that i have a pc and im able to play it on this now, and ive discovered this modding app. Its made the experience wayyyy better and its a cool thing to use and it just makes the game cooler and there is so many thing s you can just fly past in the game and get early in the game and think that is way cool and i will definitley will be using this with plent of other games... Thank you guys, MagicalLeaf252:)

ToxinRayn 9 Oct
So far everything works great, though to get some things like Unlimited Health for both you and your horse to work you need to triple tap. (on-off-on) The "Set money does nothing at all. Though if you want to gain a lot of money fast just turn on Unlimited Items for a short time and sell the same thing over and over. Also turning on Unlimited Items means buying things costs nothing even though they have a price tag.

eclipse25 7 Oct
Thank you so much for Taking your time to make this client. The biggest problem in This game for online is Always making sure i have ammo and with the unlimited ammo i dont ever have toi worry about blowing all my cash on that

EagerMoon82 22 Jul
works pretty good. just check your money after donating to camp if you use the cash mod. sometimes it gets wonky. i usually give myself like 50 bucks and then i save and restart without the mods. pretty cool

PerfectBoat540 8 May
Thank you. A few weeks ago the game would crash constantly, but now, its perfect. Its so nice to play the story mode with a few extra bucks, and unlimited dead eye. Really a much more relaxing experience after a long day at work thanks to your team.

SuicideObama666 24 Apr
This trainer makes the entire single-player experience and storyline so much more convenient! I got tired of having to farm all that money just for camp upgrades after my subsequent playthroughs.

InvisibleFire352 27 Feb
This developer has done so many great trainers. None of them have ever failed me. Everything about this mod is just perfect. However it is worth noting that Unlimited health is a bit broken however, since you can have unlimited items you can drink a vast amount of tonics to compensate for it. Thanks for making my game, awesome.

KomradZX 23 Feb
You guys are great! For the longest time I used Cheat Engine, which works alright, and I still find myself using it once in a blue moon. But WEMOD FRIGGIN ROCKS! I love being able to use my phone to turn cheats on and off. So awesome. Anyway, I was born in June of 89 and have been a gamer my entire life. WeMod is central to my gameplay when I'm not looking for competition and just want to have fun. WeMod enables all that fun and so much more!!!

LostManAbroad 23 Feb
The only problem that I found is that some of the cheats won't turn off again once turned on. For example, I turned on infinite horse energy. Then I came across the mission where I had to tire out a horse so it could be ridden by a boy but I had to fully exit WeMod to be able to do it as the Infinite Horse Energy would not turn off.

Albert191 17 Feb
Thank you so much. This is the only trainer that I trust on my computer. I have told many friends about wemod. It is as safe as a new born baby. It has helped me so much in the games that I enjoy. Thank you for your time and skill in putting this mod together for all of us to enjoy.

Roachapproach 16 Feb
Had a good first experience using this so nothing to complain about really. I needed that extra bit of help with a couple of missions and this helped me through that so thank you. Would recommend to new users it works as intended.

Kyr0n99 13 Feb
I've used this app for years and the devs keep putting out quality trainers all the time. I fully rate this app and have actually recommended it to my friends for the singleplayer trainer needs. Keep up the good work
END_OF_DOCUMENT_TOKEN_TO_BE_REPLACED