Our Kingdom Come: Deliverance trainer has over 13 cheats and supports Steam, Epic Games, GOG, and Xbox. Cheat in this game and more with the WeMod app! 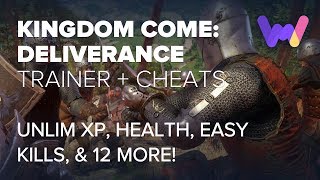 ReliablePuppy654 11 Aug
Just having the money to buy great gear makes the game even more enjoyable for a second play through. Excellent work on the mods, thanks!

RikPlaysGames 28 May
Revisiting KCD I Simply wanted some mindless auto pilot fun. no combat stress no grinding just following the story again and enjoying the game world without effort. many thanks

EpicQuilt851 5 Jan
it is good, I did not have any problem so far... the bugs are mostly the same as the PS4 version and it does not has nothing to do with the mod, just saying...

AtomicStick964 31 Dec
Awesome job and all mods worked well. Any chance of getting a mod to keep clothing clean, and one to steady bows whilst shooting.

IdealLeaf717 3 Sep
i found the combat in KCD to be obnoxious and difficult, your mod helped me get around that and just enjoy the game. thank you for that.

Commana 29 Aug
This trainer works like a charm. Usually WeMod does pretty good anyways but i usually occasionally run into a problem. I have not ran into one so far.

AbsoluteZoo196 29 Aug
The program says that Kingdom Come: Deliverance isn't compatible. However, it seems to work just fine. Granted I didn't test out all the cheats.

SleepingCanvas349 19 Aug
you are the best,i admire you,you made games so much batter and so much fun with so many possibelitys,never stop ur amaizing

InstantCoder859 26 Apr
Really great cheats, play well with mods from Nexus. One thing that's missing is the ability to change reputation in a region, or with a specific person, such as the person you're speaking to. The current method of causing everyone who is currently loaded (ie. everyone in your area) to have 100 reputation with you is a bit ham fisted, and can actually prevent the ability to raise a regional reputation stat in a specific way because it will increase a merchant's reputation (of the player) to 100, whereas raising it manually through trading/tipping them will raise their rep by a smaller amount and raise the region rep by a small amount with it.

D3LUX3 10 Apr
Great trainer, helps through some of the impossible bugs in the game but be careful, it can also cause bugs with the reputation at max for all towns.

CompetentDeer609 6 Apr
Excellent performance, thank you so much for making all these wonderful cheats. Two things missing, however: 1. The Reputation system in this game is weird, some explanation as to how it works and when would be nice. Perhaps a different approach that forces anyone who talks to you to get 100 rep with you would work well, since the area reputation system is so strange. 2. Cleanliness - it would be nice if it was possible to keep all clothes (and self) clean as if the player had just visited a bathhouse, no matter what they go through. Thanks again for the nice cheats.

ClassicLobster584 4 Apr
Awesome app! Especially useful is the unlimited items, cause you can practice your shooting with the bow without having to worry about arrows running out.

S_M_U_R_F 6 Mar
Unlimited items don't work on those drinks that let you save your game which is kinda sad, but besides that it's super useful when you feel like you're stuck, plus it's fun :)

SwiftHat187 4 Mar
Thank you man ,this game became more "playable"(given the fact that this game can prove to be a royal pain in the ass most of the time ) thanks to your perseverance and efforts, I really appreciate that .

PerfectButton294 18 Feb
Thanks this has made some areas of the game more fun for me. I was stuck fighting a boss with very little health before a quick save. It was impossible with out the cheats <3

SmoothFrog23 17 Feb
Without this, the game would be totally unplayable. The game is extremely difficult and the programmers screwed up their own game. The game is beautiful and the story is great. But the gameplay is awful. The only reason I am enjoying it is because of wemod.

LovelyClam101 9 Feb
I ve been using WeMod for awhile now, and they understand that when you buy a 60 dollar game, you should be able to play the way you want. And they give that ability.
END_OF_DOCUMENT_TOKEN_TO_BE_REPLACED