Get ELDEN RING Trainers and cheats for Steam with the WeMod app. Elden Ring is an open-world, third-person action RPG, from the studio behind the Dark Souls franchise. Unravel the mysteries of the Elden Ring’s power.

Encounter adversaries with profound backgrounds, characters with their own unique motivations for helping or hindering your progress, and fearsome creatures. Cheat in ELDEN RING and more with the WeMod app! Also feel free to get acquainted with the thousand other games WeMod supports. 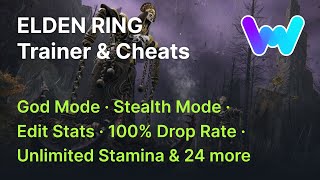 IcyHat202 29 Sep
Elden Ring is a HARD game and I was getting disheartened thinking 'd never get to explore more challenging areas ... so gave WeMod a go. Great decision! Thank you so much for this game changer. Currently doing it on max everything with my main character just for fun but will experiment with settings on other characters too.

Camblestown 15 Jul
Elden Ring worked great . The only thing was Wemod up grades didn't work on the Elden Ring game . And I didn't get the information from Wemod . It took me a wile to find that information else where . I had to use the first Wemod . So in the future if Wemod isn't working I'll go through all the upgrades to se witch one works . And this information needs to be in the Wemod trouble shooting information

PositiveThunder447 29 Jun
after some trubleshooting with the app i was eventually able to make it work. admittedly it was my fault for trying to mod the game using nexus. but after reinstalling the game and fallowing the almost to simple instructions it worked perfectly. THANK YOU WEMOD. now i can play without having to rage quit lol.

GoldenStranger172 4 May
Thanks for making a way for less skilled players like me to have even half a chance to play an amazing game like Elden Ring! Without the increased runes (which allowed me to raise my attributes), I was always running from everything but now I can at least attempt to stand and fight!

quixoft 21 Apr
Thanks for the Elden Ring cheats! I'm terrible at these games with severe arthritis in my hands so I have no chance in these difficult battles. But I love the exploration part of games like this and your work let's me explore these worlds I would otherwise be unable to get through!

Redsilverxx 15 Apr
the mods work great with the game, i have not had any game crashes due to the mods and i have not played any multiplayer games with the mods just enjoying a singular player experience, feeling like a god im very happy you added fly mode it has made the game alot easier for me to get past because im not a huge fan of elden ring

Mokushotaar 10 Apr
Everything works flawlessly. The only recommendations i would have would be something along the lines of adding a "Persisting Buffs & Effects" cheat for things like greases and spells like Magic Grease or Vyke's Lightning to last indefinitely or until death/override via another spell/item.

BenBentheWeatherMan 4 Apr
Your product allows me to play Elden Ring without any of the stress. When I come home from work and I have a few hours, I don't want to spend time trying my hardest to learn how to play this game at a professional level. I simply want to explore in God Mode offline and collect some loot along the way :)

ProperDust987 2 Apr
This HELPED me SOOOOOO much now that I am half bald from pulling my hair out over some CRAZY BOSSES I can finally progress through the game and Just move right along and see all the game has to offer so thank you for this it has really saved me from being trapped behind a Boss.

QuietMitten590 26 Mar
It was good, the game is just being a bit glitchy with them on. But we all know that is kind of a given especially with a new game. I dont use it for online at all, only for tests for what i really want to do with the game as far as my build and it works perfect for that.

SHEWOLFBAMBI 19 Mar
AWSOME! I love the fact I can play this game offline and go through the story with out throwing my controller and have another account for online game play to expierence the harder ends of this game with friends online(of course without trying to use this). Great job!

novmbr 13 Mar
Thanks for the trainer. It has really helped to get down the timing of the attacks. I make quite a few mistakes, and as I am getting older with less time to play, it's hard to remedy those mistakes in a short time frame. Thanks for allowing me to progress through the story.

RandomSky247 12 Mar
The 100% Drop is pretty much all i have used tomake the grind for gear and items much more enjoyable. What would take 10 hours without it took 20min when grinding smithing mats. So that is very nice. All the other stuff will be amazing when making new characters just for fun too.

LostGamer742 8 Mar
Overall I'd say that the mods are well done. You can play the game and either easily cheese it, or still have that fun sense of danger and death, just less of it. As to make people like me have a good time and get less frustrated, but not detract from the core fun and gameplay. As well, it has a lot of options you can play with, which is always nice.

AmpleBean484 7 Mar
Thanks for some great cheats. While I know being hard is what the game is all about, then the game is simply too hard for my patience. I still want to experience the gameplay and the story, and increasing the defense and attack multipliers just a bit let me play at an "easy mode" which is just super great. Thanks again!

SacredPizza101 6 Mar
great, but i wish the consistency for the God mode and infinite health mods were better. There are still some traps and such that will kill you, or, if you should die by chance, the cheats do not function properly and are immune to some attacks and not to others. Speaking of taking damage, long range damage of any kind, from magic or projectiles still causes damage with both mods running.

IdealMask589 3 Mar
i had to uninstall and reinstall wemod ... so i could play elden ring... and this is more to the point of wemods than elden ring.. but man the devs for wemods are just phenomenal ! its cool AF how they give us solo players with limited time the ability to just experience a game the way we want to within our given time frame with no muss and no fuss !! keep on keepin on my guys/gals!

SuperiorPin609 27 Feb
The cheats help me a lot and am very thankful to play the game without endlessly raging. I would also like to point out that while godmode is toggled, you can still take damage from fire and explosions, but overall this trainer is very good and I would recommend it to anyone who wants to enjoy games made by FromSoftware without having to worry about the extreme hurdles their games provide

Kevain182 27 Feb
ALL THE CHEATS I WANTED TO USE WORKED ON THE LASTEST VERSION OF THE GAME ELDEN RING AND THEY WERE ALL FULLY FUNCTIONAL!!! I ABSOLUTELY LOVE WEMOD AND I RECOMMEND THAT EVERYONE SUBSCRIBE FOR A "WEMOD PRO YEAR SUBSCRIPTION" CUZ THIS CHEAT TRAINER IS GOING TO HELP U OVER THE LIFETIME OF THE GAME OVER THE NEXT YEAR!!!!

SupremeScrew477 26 Feb
Absolutely perfect other than one thing. Whenever you get hit multiple times back to back or very quickly, it kills the player, even though the player has infinite HP. Now I do not know if this is because of the game or not but, it's pretty much the only problem I have.
END_OF_DOCUMENT_TOKEN_TO_BE_REPLACED