Our The Forest trainer has over 15 cheats and supports Steam. Cheat in this game and more with the WeMod app! 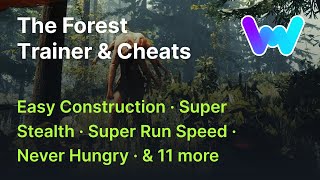 Oldgirl 2 Dec
This is a great help to old (67) folk like myself. I tend to be slow since I had a brain tumour removed (not cancer so very lucky) I have missed playing games, but with your help I’m back again! So pleased. Thank you so much :)

OriginalLaptop529 22 Jul
Epic, works without being the host. Best part is that only one person has to have one of the weapons, they throw it on the rack, you pick it up, ctrl+F1 and place the weapon as many times as you want.

Games_Devolve 29 May
this mod has helped me play with friends that i never would have got to play with. thank you very much please when the new one comes out please make mods for it very quickly much appreciated!!!!

BraveBubble715 19 May
works great! just wish the 'easy construction' would prevent the HUD from blowing up with the items required to build structures after they've been built.

SimmDogg 17 May
Keep on doing what you do. It's not a directive. I'll support you when I can. I'm broke most of the time because I've been chasing a 20 year old dream I refuse to stop chasing. Thank you for everything you do and making this tool for easy use without the worry of third party thieves.

UrgentChalk509 7 May
It was pretty good but i encountered some bugs which might not be related to wemod but it happened as i turned on wemod. My friends katana was bugging out and he was holding it like a spear and i couldnt shoot my bow.

SmoothRabbit347 25 Apr
the codes work really well. And are saving me so much trouble. We just lost our entire save do to one of our friends getting a weee bit to excited to use dynomite on trees. We lost months worth of work. This is really helping make up for that.

Ki11erTeddybear 17 Apr
OK Thank you to the developer, games like this unless I'm playing with friends or going for achievements I just like relaxing and building, it's also nice for learning the fundamentals of the game. And I like that I can increase the difficulty by choosing what cheats to put in with simple F1-12 key combos. Again Thank You

ChiefCorn258 24 Mar
thank you for making the mod this makes the game actually possible we had a glitch where we could not get the gun parts now we can share it with unlimited items!

StrikingProse261 14 Mar
I liked everything mostly but the easy construction seemed kinda bugged maybe its just me. If anyone can tell me how to use it it would be appreciated.

K1ngOfficials 13 Mar
Tested almost all mods, and they worked just fine. With some games, that haven't had their mods updated for some time, the mods unload by themselves, this does not happen here. Solid work.

Babzilla 7 Mar
Very helpful for me when I just want to explore the caves, take my time, and am able to kill the enemies easily and be on my way. Great for use when you want to focus on story and exploring and not the survival.

CapableBottle757 4 Mar
What an awesome trainer. It's unfortunate I need Internet to use it as our town only has internet in the Library and Hospital. There's some +87,000 out of 145,000 without Internet connectivity. Some 38% of Canada still doesn't have any means of Internet. Musk is offering areas without for a crazy price of $1,580 a month for 60 Mbit and a 20GB cap. Way too expensive. That's like 3 months rent.

snoot870 4 Mar
works like a charm! thanks for wemod as a whole as well. when you've played a game extensively you might as well get a kick out of it another way and this way works for me!

PatientTable417 19 Feb
One thing - the easy construction mod doesn't work for everyone in multiplayer, only the first one who loads in with it and/or the one who makes the save

Insanity_666 18 Feb
Was an awesome experience and the mods worked beautifully. Made the game much easier to play with survival on and the amount of options i had to do things differently was enormous! Thank you for the outstanding effort you put into these mods! ^_^

xD3THxADV0CATEx 17 Feb
Thank you! this trainer is awesome! I am however hoving issues with the modern bowafter shooting with it for a little while it just wont shoot arrows anymore.

EthanNahte44 7 Feb
this is an awesome mod set and i personally enjoy it since i don't have to remember to type in developermodeon on the menu, but i wish that there was an option on this mod set to give you all the items in the game
END_OF_DOCUMENT_TOKEN_TO_BE_REPLACED