Our Sekiro Shadows Die Twice trainer has over 11 cheats and supports Steam. Cheat in this game and more with the WeMod app! 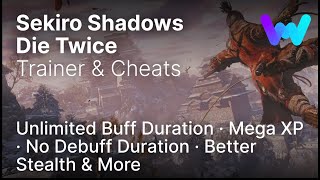 canon78 1 May
Incredible game and the cheats really help to get past the hard parts or even allow me to practice the timing for me to improve!

EvilMP 3 Jan
Thank you for all the hard work. This helps me out a lot since the fine motor skills (nerve damage) in my right hand and arm prevent me from getting the timing down when playing Sekiro normally. Much appreciated.

SensibleTree387 21 Nov
Thank you so much. I love FromSoft games but only ever play as ranged so the fast-paced melee combat of sekiro was killing me. These mods allow me to actually enjoy playing the game without sinking time I genuinely don't have around work into learning a whole new playstyle

KindZebra870 4 Oct
Using Wemod is the only thing that makes this game playable. Without it, the boss fights would have to be repeated so many times. I can attempt the boss several times and if it gets too boring, I can then utilize wemod to help me move the story along.

WiseZoo747 15 Sep
Great work devs. It is because of people like you I can enjoy the story of the game no matter how tough the game is. Lots of Love!

ChiefBranch501 1 Sep
it helps me play the game already since it takes time for gamers to develop some skills and reflexes in playing this insane game.

Pacat 29 Aug
its cool tho, but i have a small problem with it... you can turn on cheats using Keybinds but you cant turn a cheat on in the app WTF?!

WiseAvocado366 19 Jul
well i had sekiro beard mod and after i use this wemod sekiro's head has dissapeared. Only clothes and kusabimaru is going around lol

BraveRain914 18 Jul
The game is far too difficult, even for a seasoned Souls player like myself. These boons make the game playable for me. Thanks.

BOOMBOX72018 10 Jul
all's i got's to say is you guys rock for giving us old players that have kids/no time for a challenge just want to run threw a story and have fun whooping bosses butt's. thank you so much

LogicalCake202 5 Jul
I continue to use this mod package for Sekiro, and it is really a great help for alleviating some of the more annoying things in the game such as farming for divine confetti or snap seeds. The toggle feature on unlimited health is also a godsend for learning a new boss's mechanics without having to continually run back from an idol to retry. Great mod. Can't recommend enough.

Arthimea 3 Jul
I am all to play the games without cheats, but this one really is not worth it. There is difficulty which is rewarding and difficulty which is kinda pointless. In this case the latter prevails. Things like pressing back turns your back to the enemy, no strafe keys, no proper jump control, character hidden behind walls in fights. The story and atmosphere would rightfully make Sekiro win a GOY award, but combat imho lacks a lot, and is pointlessly made very hard. A story mode would be the best addition to this game.

Texhnolyzing 25 Jun
Needed to make sure the game was in offline mode first. Then after starting and loading in as my character, if I hit the hotkeys then it would work without any issues!

Dementian174 19 May
This mod is the only way I would ever be able to fully enjoy this game. I am so so so happy I can now explore the world of Sekiro without constantly being upset and set back.

IcyHat139 29 Apr
Hey, thanks IcyHat139. I suck at games and being able to get a little help, especially with games like Sekiro means the world to me. Thank you for being you.

SilentDolphin500 17 Apr
Thank you for a working trainer. I love to experience game's story but I'm not a good player in hard games like Sekiro and Dark Souls, so I need a trainer very much. Thank you again.

Sunheavy 28 Feb
Thank you for all of your hard work! I'm in the military (USAF: CSAR), so I don't have as much time to play games as I used to. The effort you put forth into making these trainers seriously helps me relax at the end of the day, as for some games I simply don't have the energy left after work to dedicate to learning and mastering them and their techniques. WeMod helps me be able to skip the tougher learning curves and still have fun playing games I want to play but simply wouldn't be able to in my current situation. It seriously means a lot that you and other developers work on programs like this!

RaydanZ 18 Feb
The overall experience was great. No issues whatsoever. Keep up the great work. I might as well end up buying Premium haha

QuickRiddle153 17 Feb
WeMod is amazing allowing me to explore games that are usually far too hard for me to invest the time in and just enjoy the story. Thanks for all the hard work!!!!
END_OF_DOCUMENT_TOKEN_TO_BE_REPLACED