Our Dishonored 2 trainer has over 11 cheats and supports Steam and Xbox. Cheat in this game and more with the WeMod app! 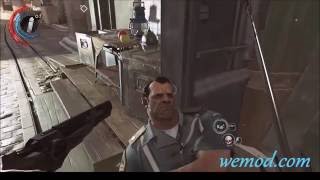 idiverdan1959 10 Nov
Now I can play this game as I wanted. Without WeMod.com, I'm able to accomplish tasks as I wanted too! Sometimes you just need a little assistance adn WeMod has done that! Well done!

Cloudmanwalker 8 Nov
The best wemodded game i have tried. All upgrades and powers from very soon into the game. I recommend playing it through vanilla first though.

owliswatching 15 Apr
I am a big dishonored fan so being able to play around with the game using this app makes it so much fun for my umpteenth playthrough. Thank you for this.

chaz373 12 Feb
I worked great, I was stuck at the end and until I realized I didn't need the cheat on, but used it just for fun and it was....really fun! Thank you, I appreciate you!

StaticBranch411 27 Jan
Thanks so much for helping players like me! I am not the fastest to pick up on some things in current games. With this mod, I have more time to figure things out. Thanks so much for your time and efforts!

ViableHat167 15 Jan
Well this so far is the easiest menu I have ever played with. but there is one downside, I have to keep the invisibility off because it causes some lag

Jarl_Skol 4 Jan
All the mods worked perfectly! I love the way the invisibility cheat works, it doesn't just make Corvo/Emily invisible, it also makes their actions undetectable, corpses don't get noticed and the alarm never gets raised, even if it's supposed to via scripted event.

THESanctifiedUndead 25 Nov
I had fun for the first time in dishonored 2 because I always hated how I need to manage my mama and be careful to not die. Now I don't need to worry about these things.

TacoSalad420 22 Sep
Just like in the first Dishonored game, this trainer allows me to have unlimited... well, everything! I just wish the trainer had an unlimited Blink distance cheat like the one for DH1 did. 10/10

SolarDog394 14 Sep
fun as hell with unlimited mana, i miss the cheat from dishonored 1 where there was no limit to how far you could blink, but I still enjoy playing.

HelpfulDust475 23 Aug
Very injoyable and effective as the "invisable" cheat is... strange as it makes bodies unseen and noises unheard but cool af either way.

AbsoluteSeal660 25 Jul
After beating the game a couple times normally this really is a great way to go back through and mess around the entire time. Thank you for your work

PrimeLion 11 Jun
Very good for allowing the Novice/new player to gain familiarity with the game before spending hours of time frustrating over how to develop and use abilities, or how to find the items to obtain such abilities. The game actually becomes more interesting to play, and allows developing player abilities and skills in a personally pleasing way. More interest, fun, and play-time all around.

SecureCrayon947 22 May
I love the work that WeMod does, it would be awesome to get some more obscure games modded but everything I try is phenomenal.

CharlieHumongous 13 Mar
thanks so much, D2 is one of my fave games and the ghost mode lets me walk around (sprint around) just taking in the beauty and taking screenshots too. If i ever get into architecture i have arkane studios to thank and you too!

KindSquirrel69 24 Feb
Worked great, thank you! The only thing I would prefer is an option to only add one rune instead of unlimited, I haven't tried the unlimited option but most games that have that WeMod option tend to just max out things like money so there's no reason to look for that anymore for the rest of the game.

DestinedCat215 18 Feb
love it lets me play how i want to...levels the playing field..the game i was playing was difficult.. this helps...happy happy happy...

PsyPirate 14 Feb
every cheat runs fine, but it would be even better if unlimited health could stop having effect after you turn it off, without having to quit the game.
END_OF_DOCUMENT_TOKEN_TO_BE_REPLACED