Our Middle-earth: Shadow of War trainer has over 13 cheats and supports Steam. Cheat in this game and more with the WeMod app! 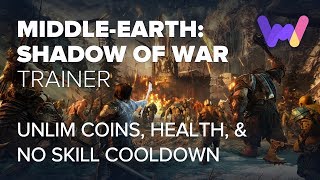 OfficialCook649 29 Sep
Great work buddy, everything works great! Would just add one suggestion.. maybe 2 options for increased % defense and attack, rather than just 1 hit everything.. But much appretiated for the great work!

RelativeBox602 28 Sep
Yeah, I'm not too young to stress myself when playing a game to I'll just use this mod to handle it easily but still with challenge. Thanks Wemod for this! Kudos to you guys.

SocialWolf908 11 Sep
This made the game so much more fun I played for Hours on end, I didnt use Unlimited health cause I still want a challengeI play on Brutal mode and still die from time to time but I feel like a God now

ToxicHorse825 27 Aug
Awesome! I don't have a lot of time to game so the slow progress to level up and become really proficient at a game can be frustrating for me. WeMod will allow me to achieve maximum enjoyment in the time I have to play. Thank you!

CreativeCoder164 7 Jan
I am VERY impressed that the system is not wholly slammed shut behind a paywall. This is my fourth time looking into Trainers, and only the FIRST time I felt that I wasn't getting a spyware loaded onto my PC. I specifically use this for games I have already beaten, and want to run another game through, but having some more access to things I otherwise didn't have before.

jahamess 20 Nov
I got to max level a little under half way through the game. I deleted my last save where i beat the game for some fun, that game was ligit, but this was a great experience.

UnsavoryDeath 30 Oct
Thank you for continuing to make mods/cheats for games. I am older and don't have time to spend 100 hours on a game anymore, and beng able to just play through and enjoy the story without fear of death and not being able to progress is really so very nice. Keep up the awesome work!

The_Wingman_01 17 Sep
Great Stuff. Love using these mods. Just need to be careful when using the add silver coins,sometimes it can crash the game and lead to textures and objects not loading when restarting. But after some reloads, back to normal so its all good

SuperiorCactus995 25 Aug
Thanks to you I get to re-experience Shadow of War on PC (originally played it on PS4 without cheats).If Talion had cheats like this (and was a canon LOTR character) Sauron would've been beaten long before the Fellowship of the Ring was ever formed lol. Excellent job mate!

EagerModder332 17 Aug
You guys rock! I don't have much time for gaming, so no grinding possible. YOu allow me to enjoy the game like a film, following the storyline. Great, just great! Thank you!

SmoothBee864 2 Jul
works wonderfully, thanks for saving me time and not wasting multiple hours to get where I want to be. I have a job and kids and would like to get to the meat and potatoes of things.

WinkingWalrus 18 Jun
Works well, though if I could suggest one thing: Put a warning on the "Add 5K Silver Coins" button to go in and out of the pause menu a couple times. Otherwise it won't work.i

Calderaith 19 May
I found a work around for the game crashes, involving using airplane mode. I suspect the game devs did something in a recent update to nerf the silver cheat on your app.

StaticEgg676 13 Apr
work like a charm third time around, I think the issue is caused by alt tabbing and activating the cheats while the game is minimized/in the background. Thanks for the Trainer, This makes it kind of fun to play this grindy game again!

DragonsLair888 11 Apr
I love it! I recently encounter orcs that didn't have any weaknesses and the WeMod app help me defeat them with ease. It does have a couple flaws but as a whole it's a great and very useful app. 2 Thumbs Up!!

OinkySqueak 6 Mar
Thanks again. I wouldn't be able to play this game without some help. You have given me a lot of help. Good on you I hope you keep making these mods/cheats. If I knew how to do this I'd make some too. :)

OinkySqueak 5 Mar
Thanks heaps for programming this. This type of game is to hard for me without your help. I wouldn't of bothered playing at all. Not really my idea of a fun game. Don't matter. Thanks
END_OF_DOCUMENT_TOKEN_TO_BE_REPLACED