Our Days Gone trainer has over 35 cheats and supports Steam. Cheat in this game and more with the WeMod app! 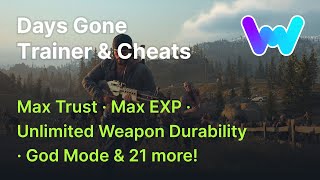 GentleShoe96 11 Jun
Thanks Bro This program is fantastic... all in one trainers. I mean, there are those times when you feel like an easy win, no atter the game. It is a great thing you are doing here. Keep it up.

LiquidExpert720 10 Jun
its great love the mods. mostly just enjoying the ignoring crafting requirements while i see if game has any gun powder left. i wish there was a way to disablle the hotkey on//off situation. sucks when i play and some cheats turn themselves on//off

1F1N 7 Jun
Love this game. Used the mods for exploration. I like to open the map. The unlimited ammo does not work on bolts, but the rest was like butter. Thanks!

GamerLuk86 6 Jun
Trainers work but they make it to where you can't withdraw the crossbow from storage and you can't use the sell stack or sell all options for bounties and kitchen ingredients.

RevJonnyT76 31 May
I guess I'm supposed to say thanks for making me pay $60 for a year of your hard earned work to make gameplay more enjoyable for cheaters. ;)

Pandemic1972 27 May
Great job on this one. Works very well and it makes it easy to just unwind after a long day at work. I've played the PS4 version several times so this is just my way of taking it to the hordes without concern for ammo or items. Again, thank you. :)

OmgItzBeefy 26 May
When playing the mission helping Boozer plant charges on the damn, you cant have "Stealth Mode" on or the enemies glitch in the door underneath. Also, it will freeze after the cut scene when you go south to look for Sarah.

Chills097 25 May
really amazing......u guys are doing a fantastic job with these mods. keep up the great mod. Wish there was regional pay so I could buy the pro version.

Johnreave007 24 May
wemod is pretty awesome. i was reluctant to download it first,but its a good initiative to collage all trainers on one place , no need to go to web to download different trainer for different games .

Exodus_derg 23 May
still works and is nice to have the ammo cheats and such. i liked the game on ps4 but prefer pc and the trainer adds some extra reason to play the game.

ROMANS828 23 May
Good job on the overlay. Makes it so much easier then backing out of the game in order to turn on certain cheats. I know you had the phone app. But i prefer this specific feature.

Helixtrice 22 May
Amazing job! Just remind folks to be sure to update their GPU Drivers. I had one issue, then checked and found new gpu drivers for this game. Once done, everything worked perfectly!

SolusArius 22 May
The mods seem to all work overall. The "Items dont decrease" one seems a bit buggy...my bounty items didn't decrease yesterday when I sold stuff, but today they all read zero after the first iteration of turning items in. Otherwise, haven't come across any issues.

LikelyFog358 22 May
Very sweet trainer I experienced none of the issues reported, then again, I only like to 'cheat' a little to make for less grinding (like bike never runs out of fuel), and this was the perfect solution. Thanks!

SweetWave153 21 May
Thank you for making this. I've played Days Gone several times on the PS4, however, I really love this game. I lived in the area for over 14 years and my parents still live there in Klamath Falls. I'm in Canada right now and can't travel yet. Your trainer allows me to just be there in stealth mode so I can just be there at times to ride around and bring up old memories. I know the game map is not accurate but it's close enough. Chemult doesn't have a community college. It doesn't even have a stoplight. If you blink, you might even miss you're going through it. Food's good there though. Again, thank you.

iamslo 21 May
I've been using WeMod for well over a year now and Everything works just fine never had any problems. Thank you guys for making our gameplay much more fun and enjoyable we really appreciate it <3

MagicalFog50 21 May
A wonderful experience! Without Wemod, I would never have the time to play a game purely for enjoyment. I don't care about challenge. I think all games should have a built-in cheat, so that customers can have the option to choose how they want to play a game. I am a senior, and do not have the reflex and memory of youngsters. Difficult games are intimidating as well as frustrating.

FiveCrimson 20 May
Gotta be careful when dying with bike fuel on max, or during flashback missions and having no item decrease on. But other than that. Works like a charm!!. Thanks

SilentShoe698 19 May
Everything worked as listed. Only thing i found wrong was there was some lag on the "no reload" and "infinite ammo" loading in but they eventually worked. Thank you!