Our Zombie Army 4 Dead War trainer has over 13 cheats and supports Steam, Xbox, and Epic Games. Cheat in this game and more with the WeMod app! 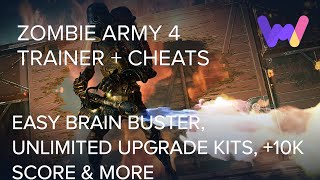 joshstang_69 15 Nov
LOVE the Mods and Trainers! Great Work!!! Maybe just a side note for improvement: Could we please get something where we can choose which grenades we can use? Like maybe "Add Bait" "Add Incendiary"...something like that??? Also the F5 "No Recoil" still does not work properly.

Jirogue 4 Nov
This has made my grandsons day he enjoys games but due to some deficiencies he has a hard time playing them. He has really enjoyed shooting zombies as his favorite TV series was the Walking Dead. Thank you so much for this.

Timelord67 3 Aug
thank you very much this software is what i was looking for. could yu please update zombie army 4 dead war? thats the game i use this software the most and now needs an update, thanks

joshstang_69 25 Jun
AMAZING! I reported a small problem with the newZombie Army 4: Dead War Udpate/DLC today, and it was fixed less than 4 hours later! GREAT JOB! 10/10.....You Guys Rock

joshstang_69 24 Jun
Every since the last update/DLC, F9 (Unlimited Takedowns" does not function. Just a heads up...

Timelord67 23 Jun
awesome i thank you for this great program. it helped me on parts of the game that were simply impossible to me now im enjoying my game alot, thanks

Maik23 2 Jun
Everything work just fine, the infinite ammo cheat sometimes makes the heavyweapons duplicate if you try to unequip them.

UsefulCamel610 31 May
All seems to be good many thanks. However was able to be killed inlast level even with unlimited health but only with mortar hits i believe

WittyAlarm567 11 May
Good job.. most of the toggle cheats working.. except when collect special weapon... then the weapon appears to be buggy and not able to drop the special weapon or switch weapon.

nakielski96 10 May
everything seems to work except when scoped and using the better accuracy, also i noticed a bug when carrying a heavy weapon and dropping it will spawn infinity and glitch out

Hitman7887 8 May
Many thanks to the developer! I am enjoying it. But there are some bug, the game error or crash when you drop a heavy weapon. Can this bug be fix?

JordanSaint1984 17 Apr
These cheats worked very well with one exception... launchers would glitch the game. I turned on all cheats at the main menu. Thanks WEMOD team.

yklee2046 7 Apr
After all of the updates, the only mod I find the most stable on both my gaming systems is dated 02-05-2020. It works even in the most updated form of the game. I sincerely appreciate the effort in providing this Zombie Army 4 trainer.

fwfdfireman 1 Mar
Great Mod, glad it came out for the Steam version of Zombie Army 4: Dead War. Thank You!

yklee2046 18 Feb
I will say again. Version 02/05/2020 of this mod is the most stable when working with older hardware and some newer systems. Generation 8 and newer of the Intel i-Core series processors work with the newer mods. Since most of my hardware is older than the 8th Generation Intel hardware, I can only use the February 2020 release of this mod. Thanks for all the hardwork.

Jorheael 18 Feb
Thank you. But have problem with "unlimited ammo" it only works if "no reload" is on

yklee2046 5 Feb
I am still using the mod posted 02-05-2020 as I am playing on my MSI GT72 gaming laptop. Other versions of the mod don't work properly thus I have to use the last stable version to continue gaming with a bit of assistance. I think the 02-05-2020 version of the trainer is the best overall in implementation. Other versions don't function properly. I think it could be my system's configuration contributing to the issues.
END_OF_DOCUMENT_TOKEN_TO_BE_REPLACED