Our Subnautica Below Zero trainer has over 9 cheats and supports Steam and Epic Games. Cheat in this game and more with the WeMod app! 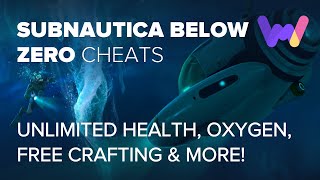 LuckyClam929 22 Aug
everything works really well the swim speed hack, if not turned off, can get you stuck on surfaces while on land.

SolarFlame205 6 Aug
Cheats still seem to crash game if enabling more than two at a time, but if enabling them slowly-- it works flawlessly

SolarFlame205 13 Jul
After a couple mishaps with the cheats crashing games on toggle, I decided to simply activate one cheat at a time-- allowing some time to pass inbetween, and that allowed that game to run with stability

CreativePancake966 25 Jun
not bad! the super swimming speed is really useful when you want to cross the map in less than like, 2 hours? super convenient, except when building

ClassicalCrown880 11 Jun
all i used was the super swimming speed but it worked also im playing on epic games :)

Stardead89 7 Jun
The mod working, but yiu need to used it by pressing play on we mod to active the ,od

PrimaryPickle501 28 May
The version of this trainer is incompatible with the current version of the game. It must be updated!

FoxLogan 27 May
than you for making trainers and awesome and easy experience, if i could afford it id be pro all the time,

Lominoid 23 May
love the game but gets grindy and boring fast for me and this just speeds up that. Love it

ActualMonkey243 21 May
It was good, also there is no updates needed because its fully working still. :D

Chillstrings36 19 May
Honestly, I'm terrified of all of the creatures. I've wanted to play in a Creative-type game while still collecting stuff fairly, but being immortal, so I can experience the story, too. Thank you!

Axegash 17 May
You need to launch all the cheats you want when on the games main menu. If trying to load a lot of the cheats when actually playing the game it causes bugs and crashes.

Hpi2005 15 May
worked well except for unlimited water, the game crashed with that one so i didnt use it

ManualSeal851 9 May
I love the game but this does add an extra fun edge to the game. Thanks so much for taking the time to make this trainer. <3

S_M_U_R_F 29 Apr
Would be nice if you could be able to have unlimited health for your seatruck and your prawn suit, but besides that, it's really simple, fun to use and just great, thank you :)

ModernPotato198 18 Apr
Awesome, works great, although the f7 shortcut was a bit of a hassle because of the debug console (sorry, I don't know what to call it). It works great!

WildChicken424 28 Feb
Thanks a lot, figured out that need to quit game and restart for some of the cheats

WisePancake 16 Feb
Works well but the game crashes if you turn on all the cheats you want one after the other, especially unlimited battery.
END_OF_DOCUMENT_TOKEN_TO_BE_REPLACED