Our BIOMUTANT trainer and cheats support Steam and Epic Games with the WeMod app. BioMutant is an open-world, post-apocalyptic Kung-Fu fable RPG, with a unique martial arts styled combat system allowing you to mix melee, shooting and mutant ability action. 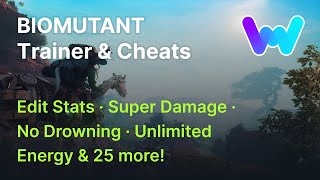 IputYOUintheICU 7 Dec
This is an absolutely beautiful game. any game that has a dark souls style of gameplay would be super fun to play with WeMod

JSpartan117UNSC 27 Nov
Cheats work extremely well. The way I use cheats in WeMod whether it be for Biomutant or any other game is I take a photo with my phone of my computer Monitor with the cheats on screen. Then while in game I can just look at my phone to see what keys I need to press since I play my games in fullscreen mode.

Notamate 23 Oct
Bloody awesome. Perfect way to learn how to play a new game. Once you know what you're doing, try the real deal. Keep up the great work.

MobileDuck623 24 Jul
was very nice. Also the narrator said something like "wouldnt it be cool if we could flap away like a bird" as i was flying with infinite jumps.

AbstractZoo223 6 Jul
Thanks DevGuy! I can't use Cheat Engine because of BitDefender blocking it, so this was a great find!

Godsaves 11 Jun
Nice options with Cheats. Some trainers don't even have these options. I love using wemod when i want to have fun.

Xorr0n 10 Jun
Thx for putting your time and effort into this mod. It works properly and I have not had any issues with it. I am an Ex pro Gamer and things like this can really help. They don't think (The Devs) that children could be playing this game. Using this mod to help them really learn how to play the game is helpful. Also I find Drowning in this game just stupid. Having that turned off would be a bonus. Now s far I have mainly used this mod to get some extra currency. Don't really need it for anything else. That said, this allows people to play however they want. Whats better then that? So Again, Please let me thank you for all your hard work. I hope Wemod can keep attracting more people like you to Mod the game.

SlappyMcCr0tch 5 Jun
Thanks for making the game so much more enjoyable considering the somewhat rocky launch. Mods were available the day after release I believe. Good job, team!

Kuwi_The_Messenger 4 Jun
Could use an way to edit what "buff" guns and melee get, riposte and sawblades are far too common for purple-tiered loot.

Smoogle 2 Jun
especially good when you the game gets an update that breaks my characters gear and ruins my build ......

itzcj 1 Jun
The features work flawlessly and enhanced the game as advertised! Happt with WEMOD again and again, game after game they continue to deliver!

BossLogic83 31 May
All enabled cheats worked at least once. Light only worked once but was enough for the entire game.

CaptainN1979 30 May
Works as intended. These days I find games more enjoyable with cheats. Not sure if others agree LOL!

Smokefox42 30 May
Wemod replaces the lack of developers adding in cheats or god items and I can't get enough.

Algol132000 29 May
Seems awesome so far. I hate to use cheats but as I am a disabled Veteran with nerve damage. WEMod cheats allow me to continue to play games I am enjoying without the frustration of not being able to play them at all. So thank you guys, if I could afford the pro version i would help you guys for your work by doing so. I apologize that I cannot currently afford to do so. Again thank you greatly for your work.

Acirno 29 May
Thanks to the developer, but if it keeps asking me how it was every time, well, take a guess.

MBDrigg 27 May
Steam cheats seem to work fine with EA Play Pro version of Biomutant. However, GOG codes do not. FYI Thanks!

Sinbadd63 27 May
Thanks it has made crafting much better and give me a better chance at finishing the game!

RetiredTwig411 27 May
Wonderful job and thanks for cranking it out fast. I just wanted to mod my money and i love how I can only choose to do that.

MadMan83 27 May
thanks for making the most out of my time. im very happy icould just play straight to the end
END_OF_DOCUMENT_TOKEN_TO_BE_REPLACED