Our Total War: ROME REMASTERED trainer has over 13 cheats and supports Steam. Cheat in this game and more with the WeMod app! 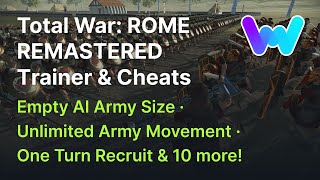 EagerPoison894 20 Feb
So far so good! A little scant on cheats though.

greystorme 12 Jan
Works good... now if the game itself would work right:D

MoralMist881 30 Sep
So far no problems with Rome Remastered

Drestes5820 11 Sep
Cheats work very well. Except, just like every other Total War game.... whenever I put my units on God mode, some will die and will just stand there and not lay on the ground like normal dead people will do? Maybe take a look at it?

VegasOZ 5 Sep
All seems to be working fine, thanks.

pjwwolf 24 Jul
was fairly easy to understand and get running. ran smooth and worked flawlessly.

PrimaryTree622 25 May
my game crashed, but it may not be related. I did see that the money cheat worked.

Gauwfn 14 May
Yeah, you guys are on top of it for sure!

Grognard1980 13 May
Helpful in the Alexander Campaign. Thanks!

BravePin474 12 May
Great work, everything i have used has been functional!

cac1674 1 May
it worked great till it crashed the game. since its so early I cant be mad about it tho.

ClassicalCamel313 1 May
Thank you for getting this out quickly! One more thing I want is console commands with achievements.

ksk1969 30 Apr
So Far it's working fairly well, watch for the next patch!
END_OF_DOCUMENT_TOKEN_TO_BE_REPLACED