Our State of Decay 2 trainer has over 16 cheats and supports Xbox. Cheat in this game and more with the WeMod app! 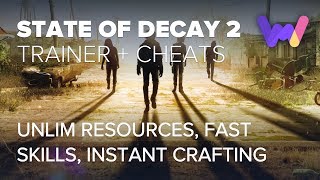 ObetIsHere 23 Aug
Mods here are great. I've been playing the same game for many hours, It's my first time playing with mods using wemod and I'm having fun playing around. It's plug and play, I also tried using nexus mod to compare, but I'm sticking with wemod because it's very convenient. I'm hoping creators will continue to update the mods in the future

RETR0GAM1NG 3 Feb
i enjoy the slaughtering fun on zombies without consequences. problem though, not sure if this is intended for but Unlimited heath,unlimited stamina, No fatigue, and instant upgrades seem to turn off after i activate them and don't work in game. otherwise all the cheats work like a charm.

MrTruthbTold27 22 Aug
Thank you guys/gals, this app has been enjoyable.

Kaiser15 24 May
Great trainer,makes it easy to farm Daybreak (doing it normally would be a MASSIVE hassle). Cheers!

Auckman 8 May
great allworked but the unlimited health and ammo

PermaFrost_d 6 May
Time controlling worked, Nothing else did however. May be related to there being 2 editions of SOD2 listed, but only one being usable due to MS upgrading all versions to Juggernaut Edition

LTwinters 24 Apr
Good stuff. Whomever you are, you are appreciated. Never forget that. Much love from me and my gf o/

FairPopcorn749 12 Mar
I was good, but the unlimited ammo was not working

Kilikis 11 Feb
Yo thanks man! For making my second play through of this game, a ton of dumb fun. Reminds me of when I got a gameshark for Resident Evil 1.
END_OF_DOCUMENT_TOKEN_TO_BE_REPLACED