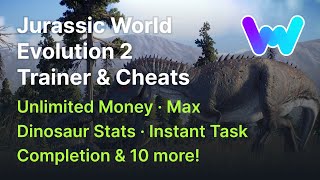 BillyBobJoeHurtin 24 Jan
if you load the game normally and then activate the cheats they work great! but if I try to launch the game with mods running it crashes

Lucypher 29 Oct
good work everyone! My children think I'm the greatest for making their park. I definitely couldn't have accomplished this without y'all!

BrittGOAL 25 Jun
These mods/cheats allow me to enjoy the game more than I was before. I love gaming but my disabilities sometimes get in the way of that. Thanks for making gaming easier.

ElegantSponge253 19 Jun
Thank you very much, these mods were very useful in-game and I would like to thank you for it. Great work on these mods as I use them almost every day. Thank you and have a great day.

AmpleSeal120 24 Apr
thank you this has helped me so, so much pn all my games i learned about this on a youtube ad and on the ad talking about like downloading viruses and stuff that is so true thank you

NeutralPlate457 24 Feb
Thank you so much because the reason i got Jurassic world Evolution 2 was to play sandbox but Chaos Theory was so hard and now i was able to complete it.

FairGoat164 17 Feb
it very good makes me grind for sandbox faster. need sandbox dinosaurs for dino battles and to spend less money or legit no money at all. so in total, it was ok.

QuietCheetah560 21 Jan
After my mosasaurus died from the game glitching, I sought out cheats to get enough money to buy one back. Thank you times a TRILLION for making these cheat codes

DrNotable 14 Jan
It's a great game with some great mods that are much easier to activate than mods coming from other Apps such as NexusMods.

OpticalCoat455 25 Nov
Thank you, I was having a major issue with the last part of the Camp. I ran out of money and couldn't fix a fence. You guys are awesome. Thank you so much <3

DannScott 20 Nov
It works perfectly, It would be nice to have more options to fine tune the gameplay, like scientist skill points, gene mods and those kind of pointers that let you really customize the game.

Tybear30 15 Nov
Im really glad they got Max Scientists Stats put in. You dont know how annoying it would be to have to not research because of that.

TFA2021 15 Nov
It's very good, however most of the time, dinos start glitching out, I have played this without cheats and after a while, I put two and two together and discovered that Wemod was doing it. Other than that it is still good.

CyurusAriens 15 Nov
Thank you! Everything works Great! Only glitch I ran into was user error and was actually explained in the info panel on that cheat.

CapableHamster320 11 Nov
Thank your for creating these useful mods and for doing right after launch. I enjoy playing games but that doesn't mean I'm good at it. Thanks to this, I can enjoy JWE2 content I would otherwise not reach. This mod also made me upgrade from regular to WeMod Pro membership. It's worth it.

Frankbubby 10 Nov
( IDK if this is for Wemod, or Frontier themselves. ) As much as I thank two of them for the cheat's and the game itself, There was but one issue,the Dino health cheat turns off when i turn it on, what is the meaning of that?

Bonnietherock 10 Nov
I really love it.I love to pay these sorts of games but only the sandbox part if ya get me. The annoying thing is that i have to research it all (which i'd gladly do) BUT i do need stars to unlock some of them which is quite annoying. so maybe (don't know how it works but) you could add a cheat like you did with JWE1 where guest satisfaction and all that jazz is easier. But still thank you so much for making my life easier and more enjoyable
END_OF_DOCUMENT_TOKEN_TO_BE_REPLACED