Our Horizon Zero Dawn Complete Edition trainer has over 12 cheats and supports Steam, Epic Games, and GOG. Cheat in this game and more with the WeMod app! 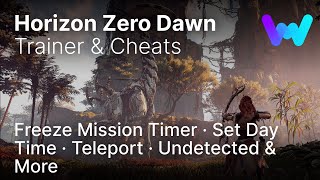 RationalStick917 22 Nov
Thank you, I only used the Easy Craft mod enabler, but it made the small tedious detail of constantly running out of ammo a non issue while still making me work for the things I have ingame. Just completed an 85 hour run with that mod enabled the entire time. Thank you again,Happy Thanksgiving, and Merry soon to be Christmas!

ash040401 12 Oct
Mods work perfect and doesn't make you feel disconnected from the game. Sometimes you don't wanna spend half you're time trying to find parts or chase down a critter you just wanna play. Perfect for either a chill play through or beating that one machine.

J4kuzzi 23 Mar
Great work on this. It would be great if we could modify metal scraps or change item upper limit, but I'm finding freeze mission timer very very helpful for hunting challenges. Don't feel like spending time on those.

UsefulWaffle704 31 Jan
thank you so much for this. I want to get the achievement of when you finish a NG+ in ultra hard mode, but didn't actually want to play it in ultra hard mode, so this invincible, invisible, super damaged thing is exactly what I needed

1SickPuppy 14 Jan
Once the kinks of the mod were figured out, things run smoothly, great work! The only thing that should be added is that, at least for me, the game locks up and crashes if you leave the super damage one on, so it should be off during most cut scenes, just to be safe, otherwise it works as advertised.

OpticalCake348 5 Jan
I was late to understand all its features so kindly do not mind my 'Sad face' selection. Thank you for not making me uninstall my game half way as it proved to be very difficult to complete the level. Many Thanks. :D

WeebDude 23 Dec
Never thought I'd say this but I'd definitely buy something that Mods for me. Sometimes I mess up a mod and it gets clumsy. This gives you the basic mods that won't crash your games. Example: Unlimited items/God Mod/Undetected/Easy Craft/Teleport. I've beaten games but I enjoy a little thrill with doing super damage, teleport to specific spots, etc. It doesn't stop you from doing your own mods as well. Nexus Mods can be put in if you want as well. Thanks devs for making games even more fun. I hope you see this devs, you are truly appreciated.

Lefein 19 Dec
First, thank you, very well made this is. Second, I'm going to subscribe once I can. I had a bit of a scare, when trying it for the first time. The slider buttons are pro only, which is fine, but it makes it appear the mods won't work at all at first glance. When I saw this wasn't the case I immediately decided to subscribe. Simply the contrast from appearance to reality, that all of this is indeed free to those who can't afford it, won't support it or otherwise. Which is exactly how I release content myself. Happy Christmas ♥

gizmomechanic 15 Dec
Finally skip through the GRINDING campaign. Now I can start at level 10, 15 or 20 and Explore and Play the game with more enjoyment. It sucks to play a game get to the max level right at the END OF THE GAME and then they want you to REPEAT the same game now that you are MAXED out. I wan to be MAXED OUT before the end of the game! fantastic app, the phone is super easy to use and game the way you want.

blitzduck 29 Nov
Since I don't always have time to play, I really like being able to craft resources without spending so long grinding materials. I haven't used anything other than Easy Craft/Unlimited Items yet but I'm sure all the other commands work just as well!

EagerMitten572 10 Oct
All of the codes that I have used have worked perfectly. I especially like the ability to toggle them on and off. That is extremely useful. These have allowed me to have a more leisurely playthrough and really enjoy myself.

SilverCrow25 8 Oct
Thank you for this! I'm a medical professional that loves to game on the side. I usually don't have a lot of time. These mods help me avoid some of the grind while still enjoying the game and the difficulties I actually want to play through. Cheers!

WorthyBee313 28 Jul
Thanks bro, you are a real Chad. If its at all possible, could you fix the ultra damage option? It insta kills everything, which is good, but it also kills things you are trying to override. IDK if there IS a way to fix it, but if you could that be awesome, its just a minor inconvenience. Thanks!

peppo69 23 Jun
only thing I wish was that it didn't automatically reload with unlimited items and i'd also want it to not have a shotgun when using the same setting. would be nice to have as a completely different button though.

GrandSpider634 12 Jun
Thanks brother..i was stuck at ultra hard ng+ due to some savefile that i loadedand i could not kill the final boss even after several attempts due tonot having any resources left everytime i got close tokilling it but thanksto your mod after 3 hours of frustration i was able to end this game and bid it farewell...i was actually doing a normal playthrough when icame into an obstacle that i needed to be level 34 todo the last quest when it struck my mind that i could use a save file which is over level 34 and the only one i found was ultra hard...again thanks and i would consider sending money through patreon but you see i am still underaged and don't have any cards

NotRobocop 15 May
As someone who's not particularly fond of boss fights, "Super Damage" helped get me over the hump and finish the story line after 80+ hours of fighting through boss fights after boss fights. Just not my cup of tea. So -- thanks for this.

AU_Lord 25 Apr
As if the 60 FPS and being able to run at ultimate settings wasn't enough, I can play this game unchained. Thank you very much for your hard work, and I hope Forbidden West sells great! I wanna get it bad... but first I actually need to get a PS5. Fingers crossed!

Rhomphaia 17 Apr
Love the mod. Two things would be nice if you could incorporate them in an update: scale the damage of the weapons, so that I can decide if I want 2 times the power, or 3 times, and so on up to super power. And having an option to take no fall damage would be nice.

Rhomphaia 10 Apr
I love this mod. It has made this game so much more fun to play. I was wondering if it is possible to make an option that scales the damage. Instead of just "super damage," if we could have a scale that allows us to select exactly how much extra damage we want to do by factors, like 2 times, or 3 times, or 4 times, or 5 times damage, and so on up to 100 times damage or something like that? Either way, great mod.