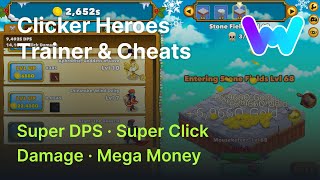 SilverCarrot205 2 10月
The fact that Im cheating on a clicker game probably tells me I should take a break.

AmpleStick678 16 4月
It was very nice, but little too op so make it actually fun to play with cheats.

PIuto 14 4月
It works very well, the things I turn on actually work. It's quick and easy to turn them on because you can set it to a specific binds. I would highly recommend for people who want to have fun and mess around in games.

DigitalRabbit602 27 3月
i enjoyed it, and allowed me to catch up to where i was last time but in an 5 hours time.

bluevision 30 12月
i like it. keep adding games tho theres game i want that are not here but overall 5 stars

Kyle_Ellis123 20 11月
The developers does great on this it helps me get to were and when I need to be!

SolusArius 20 9月
It all seems to work still. Be nice to have a ruby modifier, or even an automated event/ruby-fish clicking mechanism.

JollySnake339 12 8月
its good although i would give the option to disable it all together other then that it was amazing.

InvisibleRain552 11 8月
This made the game a breeze. Like, a little too breezy lol. I downloaded wemod for a different game, and decided to try this games mods too. I suggest only using it when youre in a spot thats going too slow, and then turning off the mods after, or just turning on one of the options

WorthySnake408 10 8月
Very good. This is a great app to use to cheat on my favorite games. Thank you very much.

TimidChaos 3 8月
It's so good! I was having trouble getting past one point on my own, and now I'm able to surpass that and do much better

HelpfulPig455 26 4月
10/10 Love it, I would say to add more options but its clicker heroes there is nothing more you could add.

BonelssChicken 7 4月
It was great, I love to play endless games with cheats because not only does it up the fun but it helps progression and game play.

Alexc42305 17 2月
For the most part, it seems to work as intended. But sometimes it doesn't seem to work. For example, i'll have mega money disabled and be making 1T per second. Then, i'll have is enabled, and still make the same amount per second. although it seems to work most of the time, so I think it's just wemod.
END_OF_DOCUMENT_TOKEN_TO_BE_REPLACED