Our SUPERHOT: MIND CONTROL DELETE trainer has over 3 cheats and supports Steam. Cheat in this game and more with the WeMod app! 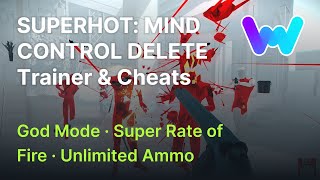 PrimaryMouse949 27 Nov
there were only 3 commands in superhot but they were cool like god mode inf ammo and instant fire rate SUPERHOT: MIND CONTROL DELETE

yukikoaria 10 Jul
Thank you for making the game fun again :)

BStrunk 9 Jul
Only thing I noticed was that the assault rifle ammo wasn't unlimited. Other than that, everything worked well.

yonisveryawesome 12 Jun
it says not compatible but, its very compatible, other than the fact that the Assault Rifle is a little bit broken for the unlimited ammo feature but 9/10 overall.

Danhelo 7 Jun
Yooo they still work. Except with the ak47 that doesnt have infinite ammo

SilentMarble436 15 May
really loving wemod. super appreciate the hard work that must have gone in creating this :)

VirtualTurkey658 13 Mar
Everything seems to work fine with the update. Cool.

Trob12 3 Mar
says it requires testing but it all works apart from unlimited ammo on the assault rifle and some animations are weird. everything else is perfect, overall its great :)

SensibleRail911 22 Feb
Thank you for making this trainer. it helped me a lot. i love it. will recomand to my friends.keep up the good work :D

Dragon_Flame 16 Feb
Thank you for making this. The cheats are very nice. Mindless fun is mindless fun. One of my favorite kinds.
END_OF_DOCUMENT_TOKEN_TO_BE_REPLACED