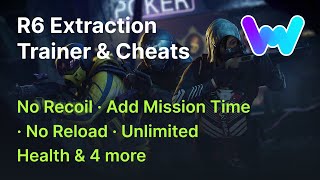 Fanboy911 29 Jun
Simply an awesome experience! Thank u so much for this wonderful app!!!!!!

Pure8591 28 Jun
Great cheats but the Mega Exp one does not seem to work. Other that that all is great! Thank you

babuidutta01 18 Jun
Overwhelmed! All my operators were in level 10 but taking to prestige level 10 was a tiresome job. Now it's easy!

Umbroid08 18 Mar
Thank you very much for updating the game! I would like to donate money but buying the pro version subscription is a little too much for me. I hope you will find another way to receive our support too.

PKMoFo 20 Feb
honesly the game is new and I'm already board of it, Wemod made it so much fun tho

Crafter741 10 Feb
Some cheats like infinite ammo don't work and sometime one-hit kills get stuck on.

Carmine_Dowd 7 Feb
Works Great, and explicitly doesn't work in multiplayer because BattleEye is disabled. Which is fine by me. Better to be blocked from cheating, than be caught by it.

CuriousBranch64 3 Feb
Love it guys, very much thanks from a guy who luvs fun. Olso evryone whos helping with this and WeMod are just doing that the best way and makes evrybody happY!! 🙏

MightySky978 2 Feb
86 previous comment. Had to put the game in potato mode to get solid fps due to Ramm usage. Works perfect now.

InvisibleTree889 29 Jan
It was very great, could use a thing where it could add xp for ops wile in game to lvl them up but other than that it was very good!!!

okolepuka 26 Jan
this game can bypass this battle eye just do not activate any cheats until you are officially in the game. also this would be awesome if there was mega xp or xp multiplier

CompetentFlame895 22 Jan
Thanks guys. wasn't going to play it again I found it to hard for me, but now having fun.

Brew46n2 21 Jan
You guys are epic. Our games, our rules and you make it happen! thanks a ton.

DesiredCrown747 21 Jan
its over powered and fun! i will like to do exsperamants with this game and I was wondering, can you be reported with we mod?
END_OF_DOCUMENT_TOKEN_TO_BE_REPLACED