Our Mr. Prepper trainer has over 17 cheats and supports Steam. Cheat in this game and more with the WeMod app! 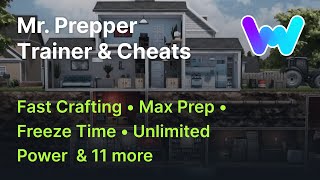 WittyChalk364 24 Jul
Thank you WeMod for providing me with the ability to play my game the way I want to play it. I could not have achieved so much without your great trainer. It is so much fun! I can do whatever I want and whenever I want.

NeatCarrot110 22 Jul
Love the game. Think you guys can develop an add on where Mr. Prepper can find a woman to ride out the apocalypse with? LOL

HelpfulPickle461 20 Jul
thanks, if only there was a mod that could slow time aswell,

WittyChalk364 13 Jul
Thank you WeMod for another great trainer. I can finally play my game the way I want to play it. I am invincible thanks to WeMod and nothing can stop me.

WittyChalk364 27 Jun
This is absolutely fabulous! I could never have made it to Fort Observer without this trainer. Thank you Devs for enabling me to play the game the way I want to play it.

WittyChalk364 25 Jun
Great gameplay thanks to the Devs of this marvellous trainer. WeMod allow me to play the game the way I want to play it. I can set my own rules and do whatever I want. Thank you WeMod for such a great trainer and for giving me hours of fun!

ImmuneWindow576 9 Jun
Should have an unlimited materials only option and money option.

Amusci 20 May
Thank you very much :) now i can just play no crazy just relax

HonestString14 19 May
thanks for the effort, as far as i can tell it all still works after the update

ImmuneCarrot297 6 May
it worked and allowed me to get out of a stuck position in fort observer.

Iceparr 4 May
It helped to get the money quicker so I could do things without going day after day just to eke out a few dollars at a time. It got to boring doing the same thing hours on end.Thanks

JaydubbWlr 23 Apr
Great mod, love the options. Though, having unlimited items without unlimited weight is a bummer. Otherwise, well done.

MithrilStorm 17 Apr
I'm really impressed with the way that this mod works. It's fairly seamless and really allows you to enjoy the game in the way you like to play. My compliments to the developer.

violetlass 15 Apr
Still works as intended even after update, before Wemod updated

WittyChalk364 14 Apr
Thank you so much. Thanks to you I can enjoy playing this game the way I want to play it, by my own rules!

WittyChalk364 13 Apr
Thank you so much. I was really, really struggling! I tried without using your app but failed. Thanks to you, I am no longer struggling and can really enjoy my game. A BIG Thank you!

GoldenWolf239 7 Apr
This was pretty cool, and for the most part the mods worked great - idea instead of it making 99 items perhaps dropping it down to one item, there is a craft multiplier if players need more than one, I dont see a need for 99 lights and the stacks replicating themselves - I am only referring to the craftable items. everything else was fine

Ckinggaming 5 Apr
I enjoyed using this trainer,its allowed me to have some side fun to make a bunker unrestricted :) hope to see a cheat thatblocks the agent from coming or having suspicion if possible.

Ashok99 28 Mar
Thank you very much for this. Hopefully, you could also update to include a no weight limit option. :) Overall very good set of cheats. :) Cheers!!!

xxg0t3mxx 27 Mar
love your mods! way better than any other trainers! and mr.antifun on the team makes it better
END_OF_DOCUMENT_TOKEN_TO_BE_REPLACED