Our Death Stranding trainer has over 21 cheats and supports Steam and Epic Games. Cheat in this game and more with the WeMod app! 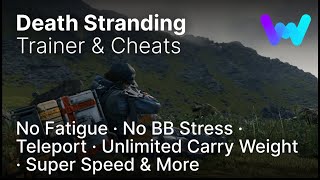 User2586908 4 Dec
This mod is great! Thank you for your hard work on this! Q: Does the Undetected make it so I cannot hit common BTs with bullets / h grenade? Also, is there a way for the no building degradation to work on the highways? That would be super helpful after all that work to build them.

ranmori 7 Oct
actually worked amazingly, toggled a bunch of things on/off with no problems. Be careful using super speed though, you can sometimes be yeeted into space

SweetWave716 11 Sep
This app is something great i am glad to have found this mod app WeMod is definitely something i will be using for all my games to make more fun gameplay, I have been searching for along time to find the right cheats app thanks.

LuckyPotato540 11 Sep
overall great, however i did have some issues with super speed. seemed to fling me into the air after reaching the top of a ladder, or falling through the map. but otherwise, very good

BukaTV 23 Aug
Good mods for Death Stranding! They all work but the Super Speed makes the avatar fall through the planet to his death occasionally so use with caution.

SlayerGTX 14 Aug
Amazing, the difference from playing always alert of falling and carrying useless items to add to the weight limit to not caring at all about the weight limit and being able to teleport around the map - Epic.

StaticBranch411 30 Jul
Thank you so much for this mod. I was getting my butt kicked by the mules but now I have a better chance of fighting them. Thanks again!!

StickyHoney 26 Jul
Easy to use, concise directions and a clean set up! I wish ALL mods were like this! Definitely love this application and will be using it for other games in the future for sure!

BL00DDR1V3 17 Jun
Great modding system! WeMod always delivers a great product. With easy to use functional cheats and are concerned with making improvments and looking for the best way to achive their high rated quality mods. Look No further than here for incredible mods Death stranding was the first mod I ever used from them and since I've used loads and can't wait to continue using them. Big Thanks to everyone at WeMOd for everything they do. As a person who makes my own trainers I still often find that I'll use their's just for the quick and easy reliable options.

Acekillerz97 15 Jun
it was very helpful - i got wound up having to do 8 - 9 journeys to deliver cargo to the same place because of the weight capacity so having that cheat activated helped because it meant that I could shorten down how many journeys I needed to do.

KakashiHatakeS 14 Jun
works fantastic giving the fact its been running for almost 3 days straight. it also stayed active even when i put my laptop to sleep mod turned it back on and the program activated immediatly and started working again. the game was also left running. so mods work great program works greater

Egon_Freeman 31 May
Apart from super-speed (which seems to be a bit buggy, though I suspect it's rather due to its nature and how it interacts with the engine), every option I tested (which is: most of them) worked flawlessly. Of most note is the "Undetected" option, which works perfectly - though one needs to keep in mind that BTs won't even show up in this mode (which is both a blessing and a curse, in a way - but more of the former). At any rate, a massive "thank you" for the developer of this little tool for Death Stranding.

TheSodaMonkey 14 May
Super speed puts you to the skybox if you try to climb something small, and rockets you sideways if you exit a vehicle. no big deal, just figured i'd put something in this box.

audiobrut 4 May
building roads and other thing would be so much more harder without this...tbh i had only built like 4 roads before this mods and im pretty deep in the game lol it would take too much time and grind.I cant sit all day and play this game so this really helps

Goatlover6 16 Apr
This trainer does not cause the Memory Access Failures that the other brand causes. So thanks!! Although it would be nice to add the Force Upgrade function.

LivingGoldfish643 7 Apr
It was perfectly fine without using the speed cheat which causes some kind of tele glitch that kills you upon lowering or raising players height..Entering or exiting vehicle, jumping or climbing steep terrain. All in all, it makes things a bit more fun. (without speed cheat lol)

StaticPlant902 26 Mar
it's really nice, although your not able to climb when using super speed at all otherwise it will send you out of world where you fall non-stop, but other than that, it's amazing :)

Bitlock 17 Mar
Hey thanks! Just one thing, a warning on climbing anything with SS on (rocks, ladders, vehicles) will launch you under the map and into a really long loading sequence.

Valdorz 7 Mar
As I expected from the devs of the game, and obviously, the WeMod platform, the functionality of both the game and cheat is exceptional.
END_OF_DOCUMENT_TOKEN_TO_BE_REPLACED