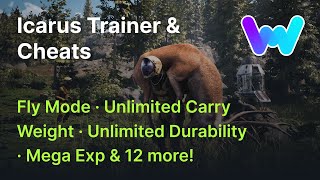 RetiredPizza739 11 may.
Compared to CH this trainer is actually updated to work with the current game. It seems like even though I have a lifetime membership at CH they are only updating trainers that would be considered major production games and put others on hold even though all update frequently. So, in essence, thank you!!!

ManualSquare337 3 may.
The only real issue encountered so far is the infinite health. Attempted to take on newer scorpion king mission and mod doesn't give infinite health. Had to call a friend to come in and revive me.

BraveSnail627 17 abr.
awesome work overall! this is the only thing keeping me playing icarus. the game is fun, but as i play solo, the game just isn't worth my time without this. One issue i have, and i'mhonestly not sure if its the mod or the game itself, is any bear, polar bear, elephant or boss they can't be killed now for a month or so.

SuperSquirrel677 26 feb.
yes, very happy to have this mod for Icarus, as I was truly struggling with the solo game and this has made a huge difference in my approach and mental attitude to the game. Thanks guys.

EqualParty998 25 feb.
There are days when a glich in the game cascades into a tragedy that is just heartbreaking. Thanks to your mod, we can correct the errors, right the wrongs and explore the games we love according to our rules. Thank you WeMod!

WendyzCafe 8 feb.
Thanks for all you do :) Is there anything that can be done about my character freezing when I freeze the Lunch Lady AI? It would be really helpful if we could do that. Currently it only works if there is more than one person playing. It would be great to have it work for single players as well. Thanks again for all you do.

Sotojinsai 31 ene.
most things work great. The only issue I have is with the Easy craft locking in the first craftable on the table and wont let it switch. So If I try to cook anything but raw meat it just cooks raw meat, regardless of if there is meat there or not, or smelt copper bars it will by default only allow Iron

DarthMord 23 ene.
Trainer works great with the latest update to Icarus. Plenty of options. The only way I can see to improve it would be to allow setting the HP so you don't die from massive damage from certain creatures that do 300+ damage per hit.

ClassicalCorn446 14 ene.
Thanks for putting this together. It has made the game more enjoyable. I like how modular everything is, this way I can remove the one or two things that annoy me about the game and just enjoy it.

StunningDeer711 8 ene.
Great Update! moving Day Time was brilliant. The Easy Craft is just smooth and amazing. Thank You Mr Antifun; you have been King of the trainer for as long as I've known of trainers (15+ yrs)

Maxwell83 27 dic.
TY it works grate and helps out a lot ther is a little bet of a bug in the unlimed items it can make items change form trees to stone to fiber but all other ones works grate ty again

lordcrowler 24 dic.
Verry useful to level up and try different build.Thanks to this mod i was able after some hours of testing to find the best build for exotics runs. Next step for me is to find a fight build.I wish you all a verry nice and warm Merry Christmass!

RegularSheep829 18 dic.
experimenting with different builds. so helpful to just skip some of the leveling in outpost mode so i can try out different stuff. also nice to do photos and some video content

XM855 17 dic.
icarus is amazing. if you like open world survival crafting games, this is by far one of the best ones ever. icarus has one of the best art styles of any game i have ever played. it is unique and everything about the game is really great

WiseBean469 14 dic.
Thanks guys for designing this program, it shortens game time to allow me to see the whole game faster so I can go back and play the games as designed. It's not cheating, it's investigating the game using shortcuts. ;)

Noxtis 8 dic.
Love the mods add thank you but if u ever have time i would like to have a option for unlimited skill points as i play solo and need a little boost for farming. Even you u dont i still love the game and will always be thankful for the mods

ParallelExpert468 7 dic.
Once again Wemod put together a great set of tools to learn a new game. When your unfamilar with it, it alows you to learn how to play and survive with out constantly dying all day. Good Job, Bonesvet

CheerfulShoe76 6 dic.
This trainer works flawlessly. I've experienced no issues with solo play. The trainer does not work in Multiplayer, but that was aligned in the info, so it's not a big deal. Great job on the trainer!

WittyChalk364 5 dic.
It was absolutely fantastic! Thanks to WeMod I was able to play a game I could not have played without WeMod! I thoroughly enjoyed this trainer and was able to progress a lot in my game thanks to WeMod!

ODKW_SatenKnight 4 dic.
Great Work! Love you work and dedication :) I will try to Go PRO or Donate to as soon as I can :c **Unlimited Crafting Items sometimes doesn't work in Workstations Wish there be a Unlimited Tech point & Talent Point or a Add Tech & Talent Points
END_OF_DOCUMENT_TOKEN_TO_BE_REPLACED