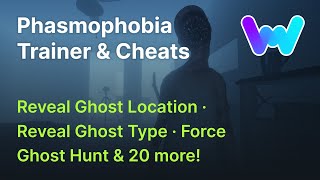 VeterN 29 oct.
Thank you! I only play with friends as that is the only time it is fun for me, which isn't as often as we used to play. So WeMod comes in handy to purchase all the items and never worry about money. WeMod allows an easy method to obtain all of the Halloween event objectives.

MagicalBubble773 28 oct.
pretty easy way to build up money and xp, other than that its an easy way to exploit the game. Kinda fun to watch the ghost move rooms and making it visible while it does it is super creepy. Haven't tried it with the twins yet but will be interesting to see how that interaction works. Overall very easy to use with the mobile app as well, i would highly recommend using that instead of hotkeys.

AbleChicken678 16 oct.
Fantastic work on this trainer! Now I don't have to get a headache everytime I just want to play the game. Not playing Phasmophobia for the "fun" of trying to earn money and having enough to pay for new equipment. Would be great if that whole aspect could be removed from the game entirely but this saves it for me.

BraveSponge644 5 sep.
Thanks dev! i found phasmophobia way too difficult so i decided to install wemod and ive been having so much more fun because ive been dying every hunt and now since i have unlimited sprint i can survive nearly every hunt. its not god mode so i can still die, so its just more fun since i can survive more than i used to. thanks dev! youve revived my love for phasmophobia :D

ObviousMachine966 25 may.
This Phasmophobia Cheat is amazing. I did only use one or two things, that being money and experience multipliers but the money is a god send, Because my friends and I play to have fun not be dead serious about not dying and all of that to the point we have no money for even getting in a game where we cant identify the ghost because we don't have the right equipment. So if you're in the same boat as me with money and friends, definitely use this cheat's money option.

Z3R0_MIDN1GHT 20 mar.
it was the best experience i've ever had, i got to get to everything before anyone else did and I got to troll them with the cursed object (starting a hunt without them knowing). But i was kind of upset that you didn't have a "force hunt" option on the menu, try to implement that if you can PLEASE. in all, it was a great experience and i would definitely recommend buying vip.

RemoteBird199 6 feb.
The Money Cheats Allow me to be less afraid of losing my gear and more afraid of the actual game would have been nice to have all gear increase/decrease with the cheat but its still amazing considering that WeMod is one of the few working ways to cheat money into the game

Profion2305 18 dic.
This cheat system is fantastic. Thank you MrAntiFun. I've been using your trainers for the longest time, it began with Warhammer40k Dawn of war and since then you have been my go to guy for everything trainer/cheat related. Thank you for all your hard work in creating these and hope you continue.

SolarVolcano431 12 dic.
Thought this was one of those softwares that claimed to be free to use, as I tried to tab out to toggle cheats, only to get the "you need premium to do this!" message... However, turns out you can just use the hotkeys! I'm tight on cash, so this is greatly appreciated. Thank you so much!!

blossom0w0 1 nov.
love it. all the options are amazing and relieves my stress that i get from trying to figure out the ghost type LMAO when my friends dont know what it is and im the only one left alive i just reveal the ghost type and ghost location and its so fun to prove them wrong. the sanity feature is great on nightmare mode too cause you can't see the teams sanity

TropicalFog333 22 oct.
Honestly a cool mod! I Just started playing Phasmophobia about a week ago, made it to level 60 just doing intermediate with one or two people. They told me about the mod, and I honestly have to say, it made the experience more enjoyable than it already was. Staying until nobody is left alive for the sake of good evidence can keep equipment at an awful low. Unlimited money keeps you in the game and hunting how you see fit! Love it!

AbyssalGreed 25 ago.
Very well done mods! The only thing that I found confusing was the 'Disable Ghost' mod which didn't seem to work (which I am assuming is an overlook on my part) and would love if there could be some kind of simple description for each toggle. I would love to see more mods added in the future for phasmophobia!

Jaymario64 19 jun.
I only used some of the cheats but not all of them, but the ones i did use did work and the ones i didn't use i don't know except for unlimited salt did not work at all but again as for everything else except for the ones like super running speed, strong flashlight, and unlimited pictures i am not sure about because i didn't try them but excellent job not the less

ClassicStone338 31 may.
Mod works extremely well. The only aspect that does not work is the Disable Ghost feature, but that is perfectly fine because unless you are trying to hard hack the game, you won't need it. Everything else works 100%. Aside from the broken feature, 5 stars from me.

unlogic101 20 may.
Pretty fun, not doing this in public servers so I don't get banned or something. My friend showed me it and helped me get it, and I really enjoyed it. Infinite money is awesome, now I don't have to worry about dying since I always add everything. Although it's a bit annoying to turn off, since I can't just close wemod, I really hope more comes. Maybe like show ghost room, xray, revive, teleportation, flying, etc. I also hate how the show ghost doesn't work or something.

InstantSpoon565 2 may.
I like the setup, it works well. I would just say it's a little barebones. I'd add some more features such as various ESP's. Some troll features would be much appreciated, like various interactions after death, the ability to change the ghost name, possibly even Ouija Board shenanigans, etc. But overall it does what it says it can do on the tin without hassle.

Requiem1210 17 mar.
grateful that the codes were finally updated. Thank you. just one thing I notice that the "super flashlight" no longer applies to the shoulder light that defaults when you switch to another item in your hand. Unsure if this was deliberate, but I do remember being able to hit T to enable the shoulder flashlight's radius when holding something else.

Requiem1210 1 mar.
fast walking is something that should have been in the game already. Thank you! The flashlight is a godsend for the large maps. I love the "disable ghost" code for when I'm feeling a bit cowardish. There are times though, I wish there was a code which made the ghost ignore you when it started hunting so you could get those darn photo quests. :D

ClassicRabbit738 19 feb.
I love playing Phasmophobia! Especially with my friends. I noticed that the characters of the game have already a flashlight their shoulder, yet we players are forced to carry a flashlight separate from the one on our shoulder. Maybe if there could possibly be a way to get the flashlight on our shoulders to work would be amazing! Other than that, wemod is doing a lovely job!
END_OF_DOCUMENT_TOKEN_TO_BE_REPLACED