Our V Rising trainer and cheats support Steam with the WeMod app. Explore V Rising's vast open-world together with friends or hunt solo as you pillage villages, raid bandit camps, and traverse the territories of supernatural beasts. Rebuild your castle and convert humans into loyal servants in a quest to raise your vampire empire. Also feel free to get acquainted with the thousand other games WeMod supports. 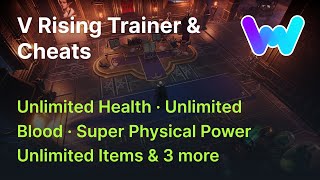 OptionalRabbit161 18 Sep
Worked Exactly as intended. Well done all! You guys are the best!

LexicalScorpion357 18 Sep
Good. Would be nice to get a magic damage mod as well but it was great!

ReiArisugawa 4 Sep
Mods were easy to use. Definitely made playing more fun since I could focus on exploring and learning the basics without having to worry about my castle deteriorating or my character dying to anything. Thanks for the hard work on these!

LinearCanvas439 14 Aug
thank for making this trainer. made the 3 last bosses bearable at least

KP_Vendetta 11 Aug
Everything worked as expected. I never have a problem out of Wemod for any game that I've played. Thank yall for always keeping up to date and allowing me to have fun!

ShadowedxWolf 25 Jul
feels great, especially helpful when trying to learn how everything works

SecureHotkey271 29 Jun
Awesome mod, I was unsure if it was going to work, Not everything is as how it is stated in most cases, This works fabulous, Thank you for creating a wonderful mod that does exactly what it says.

Imagnus 6 Jun
Thank you SO much for these cheats! The bosses can get maddeningly annoying to kill, especially after dying to them or their minions some 12 times before beating them. Only then to die 2 more times trying to get out of their stronghold with my new stuff.

AmpleSpoon404 1 Jun
thank you. However the unlimited items cheat. i cant get it too work

ImmuneRain264 28 May
E.A. Sports its in the game, but actually the mods are good the only thing this needs are teleportation powers.

AmbitiousPin963 24 May
Amazing but maybe for the Unlimited Items, it could just stack it as well.

Calintegra 23 May
Your hard work :) ,my rules in game. I wish I had skills to play , but Im geting to old to get good.

Sirjohn45N 22 May
I am very impressed with how fast you update the cheats very nice and shows great work and dedication.

SupremeParcel335 21 May
thankas keep up the good work also make this work with gportal servers if you can.

InnerSquare 20 May
Very Nice! The trainer works as intended. I would suggest a ignore crafting requirements option if possible.

MurdockGod 20 May
I enjoyed the game thoroughly. I have never been a fanatic of base building games but this one takes the cake.

XTooHumanX 20 May
Thank u so much for this trainer. Looking forward for further updates. Awesome

ThaKangBaby 20 May
It worked as described! You guys are always doing a great freaking job!!!

GlassHalfEmpty 19 May
Works like a charm, cheers lads, solo private server is slow as balls
END_OF_DOCUMENT_TOKEN_TO_BE_REPLACED