Our The Outer Worlds trainer has over 23 cheats and supports Steam, Xbox, and Epic Games. Cheat in this game and more with the WeMod app! 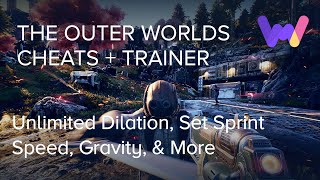 VividMitten387 6 Dec
I love this game, this is the second time I am about to beat it and I like the choices, this time I chose some different outcomes, The graphic are great especially when you have an 8 Gig Video Card and 32GB of memory.

fjj3 24 Jul
This is working great. I like to just do the story sometimes without getting all stressed out running in a harder mode and this mod keeps me from having to mess around with putting in a bunch of mods. Thanks!

agtshadow 11 Jun
Great success! Worked flawlessly throughout my gameplay using the Xbox version. I did not test the speed, but I appreciate the default values being there.

ObviousCheese315 7 Apr
Made getting through the first part of the outer worlds far less of a grind so I could get on with the meat of the game. Well worth it.

KuddaKillz31 2 Mar
These mods are stable and work very well. I like the simplicity of not needing to choose how much currency I have and can just have an unlimited supply.

FamousApple848 2 Mar
Great work! Could you increase the bit amount for unlimited money? Im unable to upgrade past a certain level because it costs over the 999,999.

Ernietron 11 Feb
it worked good, except when i have to pick up items from cases, for example, i have to turn off some cheats temporarily. you need to fix that! it is annoying and a hassle!

tchandl1 11 Sep
Thank you for creating a great tool to help me make the best of my free time. I am at that point were many of the greatest companions in my life including the survivors of my parents generation cam us e a fellow retiree with EMS training and experience close by. My retirement years are staycations at home near blessings more than I could do enough to deserve in my lifetime. Your mods are rest at home between activities with family friends and my dogs. Adventure exploration relatively quick, easy and inexpensive, that I can shut down until I have free time to pick up where I left off. You make it all so much easier. Thank you for my escape time.

NativeCheese58 5 Jun
Played for hours and the trainer worked very well, no problems at all, I recommend using these trainers as I have had lots of fun playing games with them. 10 out of 10

Psykokud 24 May
Player and Weapons worked with no issues, I also changed the run speed with no issues. I was able to toggle unlimited money and items under inventory, the only on for inventory that doesn't work in Unlimited Weight

PlacentaSalad 26 Apr
Thanks for including a cheat for unlimited perk points, as this was lacking for awhile. I hate playing games which require you to play very specific builds to unlock special dialogue or items, by expecting you to choose between playing a charismatic character or one who is a genius with an IQ of 300.

CallMeUnion 16 Apr
Thank you for taking the time to do this. I like going through my single-player games like a god as I like to crate the best world for the people in the fictional world, such as in this game which is a lot easier when you have all the options.

RoadRunner71 9 Apr
I do wish our companion's perk points were increased, too, not just the player's. I do like that you can vary the number of perk and skill points you add. That's a nice touch. Thanks for your efforts.

HonestBubble718 28 Mar
Fantastic. I tried other console mods that the internet had to offer but none of them worked. I cant believe how simple and effective this Mod is. Great work.

SSBProductions 18 Mar
Not sure if your app keeps track of the cheats used. I only used some cheats, but all one the ones I used still worked. Main ones being unlimited health, time dilation, and ammo. No problems to report.

jtaylor300 17 Mar
excellent work, unlimited carry weight not working with recent update, not a big deal though, also raising infinite money above 999,999 would be beneficial for fully maxing out weapon/armor upgrades as it exponentially increases the cost

UrgentParty433 13 Mar
Thanks so much! I play games for a story, i also have nerve damage, so it makes playing games kinda difficult, on top i work like 50 hrs a week (never go salary) so i dont have time to invest in most games i wanna play, so itts ncie to just jump in and have a blast. Thanks man!

DaMadMoose 4 Mar
Thanks, it might help us new users, if you posted a little more info on howto use your system. After using Mr Antifun's trainers for several years, I'm used to downloading a trainer, not using them through a Front End GUI.

NativeGoat848 6 Feb
WeMod is the best game assistance package I have ever seen. I now enjoy all my games. Thank you for making my games so much more enjoyable.

MrDarkWolfe 14 Jan
You've done a wonderful job with this trainer. I need and more is there. While I like to use minimal cheats, I felt secure knowing there was more there for me if needed. I've been playing the game for over 90 hrs. I've died more times than I care. I've had no worries about locks or running out of supplies. I've been able to increase my walking speed and when needed increase my jump height. It's all there for the taking! Thanks! You've improved my gaming experience
END_OF_DOCUMENT_TOKEN_TO_BE_REPLACED