Our Rage 2 trainer has over 12 cheats and supports Steam, Epic Games, and Xbox. Cheat in this game and more with the WeMod app! 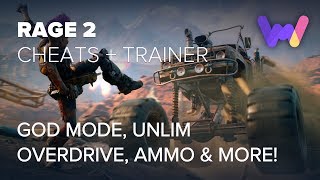 PopularToad315 9 Jan
i did nothing but slowly but surely unlocked all the weapons and vechicals annd had a blast. the wasteland is now pretty much empty in terms of enemy encounters so now i just have to complete the main story. amazing but with one issue, whenever i close the game my pc says an error accured that made it shut down. 9/10

Xiiiaces 14 Sep
Thanks for putting this together, after a long day at work i just enjoy destroying the crap out of things and this game makes that super fun and your trainer makes it easier

SimpleCheese322 27 Aug
Thanks for the awesome mods all I wish is that you could update the unlimited car ammo to 3000-4000 instead of 99 cause it messes me over and i lost most of my ammo lol, great job though everything was awesome

MovingLeaf951 1 Jun
Thanks some of the Rage 2 missions are just bullet sponge and a complete waste of time. Almost made me want to stop playing. Thanks for letting me continue the game!

NewGuy45247 26 May
I like playing doom and reloading just broke the pacing of the game. So why not remove reloading? It totally made my game experience 300% better

PleasantModder486 27 Feb
Works great. Some developers fail to realize that doing a boss fight about 16 million times over just isn't fun. That's where this excellent "trainer" comes in handy. Thanks!

FappyHobo 26 Feb
Very nice trainer! For letting old, no reaction time having, geezer-gamers like me, still have a little fun, I thank you. With no time to devote, it's nice to just play for a few and waste mass quantities of freaks!

BraveYam307 26 Feb
This rocks. I love playing games, but I don't have time to slaugh through really tough areas.These quick changes allow me to bypass more difficult areas with less restarting.

xavierprice 24 Feb
good, but some issues. Mostly that the infinite resources messes with the upgrades. Namely the overdrive upgrade (not the cheat, the in-game upgrade). Makes it last forever (or at least over an hour)

MiDiAN83 22 Feb
The steam version of the trainer works with the epic version of the game, mostly. infinite health and infinite car health don't work, but the rest seem to.

gamersupreme 21 Feb
Steam trainer works for Epic games version. Tested with the latest as of this date. The only issues is health and vehicle health do not work.

Shinanji 21 Feb
Most of the codes I used worked, with the exception of Inf Health for Player and Inf Health for Vehicle. They would switch on, then immediately off again.

Xiiiaces 20 Feb
It not being a dedicated Epic games version from wemod, most of the edits work through using the steam version. Thanks for the hard work and dedication by the developer

TheUnknown5 19 Feb
Amazing app becuase you dont need to edit the game files WeMod does it for you and its very easy to use thank you WeMod you save many hours.