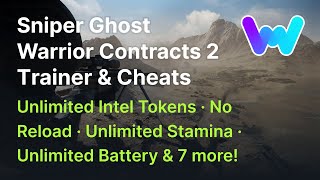 ReliableBucket724 30 Aug
Everythings great SNiper Ghost Warrior Contracts 2 but the recon keeps resetting itself since I started using the mod, can u help??

WiseChicken837 18 Jun
Thank you. I cannot be aresed to play the game because im not lazy (I am)

MaximumSeed622 27 Apr
Thanks for the sniper ghost warrior contracts 2 mod. made killing enemies fun, minus the grind

Mrshawnmars86 30 Mar
You make games fun for me again. I have a disability in my hands and I am no longer able tohold tightly or push buttons on a controller anymore so my speed and agility is no longer present and that has forced me away from online multiplayer platforms to single player platforms only and with the abilities your trainers provides I am having fun again. I can't say Thank You Enough for your hard work.

AmpleSnail333 16 Oct
I know using cheats a lot of players don't like this but I'm not a serious gamer so thank you Wemod for packing it possible to have fun and get through this. Even with the cheats applied still takes considerable time on levels

GrayJackson 12 Sep
Best thing for me after playing 3.6 hours of the game with this it's perfect for anyone who wants to experiment on their playstyles

ThatGamergrlShon 10 Sep
Thanks so much for creating an application that has been long overdue, and it works seamlessly for me. Great job! Again thanks so much.

GrandFox712 4 Aug
thanks mate great mod, doesn't ruin the story or break the game. One thing i noticed is that the checkpoints dont work

ThatGamergrlShon 1 Aug
This is absolutely amazing! Thanks so much to you for creating this, because it is such a great help!

Anon61d6f10e22737 8 Jun
I am playing this game purely for enjoyment. Wemod is worth every penny of my subscription.

HungryCactus120 7 Jun
Very nice that it came out so quickly, like almost literally on game launch. Only thing that I wish were on the console is a stealth key, other than that, literally perfect.

JulietPapaOscar 6 Jun
Awesome stuff! Works great, would love a "stealth" mode option though (similar to what is done in Shadow of War and stuff)

Tinman71 6 Jun
Enjoyed using Wemod with this game.Especially helps when trying to learn the controls for the first time, playthru.

SevOldMan 5 Jun
Love the integration but would like to see increase of Money (5000), Contract tokens (10), Challenge Tokens (10), and Intel Tokens (10) instead of unlimited but understand that it is easier. Usually do not use use the options but wanted to check out what was being offered. Noticed that the increase stays within the game going forward so there is no way to reduce without starting over. Keep up the great work.

Anon61d6f10e22737 5 Jun
Thank you so much for such a quick cheat. I am now enjoying this game immensely.
END_OF_DOCUMENT_TOKEN_TO_BE_REPLACED