Our Aliens: Fireteam Elite trainer has over 9 cheats and supports Steam and Xbox. Cheat in this game and more with the WeMod app! 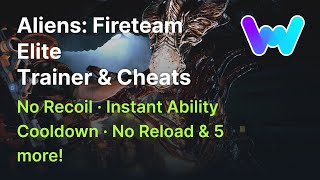 GrimDeth 2 Apr
Though it's claiming that testing is required for the cheats, they seem to be working as intended

DontGetBit 16 Mar
works but there is a few issues. with no reload or unlim ammo it stops damage to the enemy.

FairSquirrel106 17 Jan
This trainer works very well. Minus that when I am hosting it also provides the cheats to my team. Which would be great if they didn't mind cheating.

TropicalSheep776 12 Jan
very good, would like to have one hit kills/extra damage. overall though very good thankyou :)

Morough 20 Dec
It was fine. The game was already really easy, there was no point in me playing it with mods

Ridgeback41 18 Sep
Thank you for such a great softwear addition it makes any diffical game run a play much better.

KindCake702 11 Sep
thnak you so much for your hard work! the infinite ammo, no reload, and better accuracy mods work amazingly well.

PenispieInYoEye 10 Sep
everything works fine seemingly, just infinite health randomly stops working here and there, and it can make synth enemies immortal too.

Shadow-mane 1 Sep
I enjoyed the cheats and such really helpful , as I am a casual gamer. But there are some issues, 1. The flame throwers in the game do not get unlimted ammo, and the Synths in missions Can and Do hurt you and your team and in some cases are invincible them selves while the health cheat is active

CapableBike618 30 Aug
Some bugs, Like Infinity health and Shield is applied to heavy Synths/robots. But everything else works fine.

SupremeMouse482 30 Aug
Cheers, my fear of viruses has been put to rest by my urge to game like a god, first round anyway, for the story line......i promise.

ImplicitGoat31 28 Aug
most mods work for everyone if your hosting but unlimited ammo has shown to break the game for other players and removes ability for them to resupply. i know this is not meant to be used this way just wanted to let you know what i have discovered from testing.

CheatDingus 27 Aug
Everything works great in single player. The health/ammo does not seem to work when playing with friends, but I assume that's down to the nature of online play. Great work as always.

ClapPRO 26 Aug
great codes, i hope u plan more options. If anyone can find more its, Mr. Antifun, my hero.

LuBuShu 25 Aug
great, works most of the time with the gun dmg stoppin on one weapon or both, but fixed with turning off then on again

WorthyPin71 25 Aug
it worked, it was good. I relaly appreciate the lightning fast turnaround time on this too.
END_OF_DOCUMENT_TOKEN_TO_BE_REPLACED