Our HuniePop 2: Double Date trainer has over 5 cheats and supports Steam. Cheat in this game and more with the WeMod app! 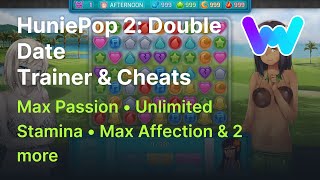 ExtremeParty781 31 Aug
It has definitely helped with the aggravation of stamina. Still want to play semi legit, but like that I don't deal with that nonsense. Well done!

FellowGrass140 8 Aug
BRO THIS WAS INSANE FANTASTIC WOULD RECOMEND TO MY DOG! I DONT HAVE A DOG BUT IF I DID I WOULD RECCOMEND

LiquidWave663 4 Aug
sick, now i can clear the game thrice faster to get each kyuu ending

ElegantGamer239 30 May
Made that ridiculous final boss fight so much better.

Sinbadd63 2 May
It really makes the game better without this the game is nearly impossible so thanks for the hard work you do!

PhantomHornet 16 Apr
Thanks a lot for the mod! Game been sitting in my backlog for a few months now, and I was not going to farm my way through it legitimately, that is for sure)

WorthyHamster818 12 Mar
Thank you.Easy passion and unlimited moves work, even though it says version is outdated. I didn't try the other ones.

CharmingHotkey662 11 Mar
Seems to still work after the most recent update, thanks. (: (Having trouble w an achievement though. Maybe a max sentiment mod, please?)

MrGuiltyGiggles 2 Mar
i love the game and have been waiting for it. great job

TheSunPraiser 21 Feb
This trainer works perfectly and I had 0 issues with it, I was even surprised when I found out I could toggle "East Affection" in between the romance and bonus rounds so I could actually play the bonus round instead of basically skipping it by having Easy Affection enabled. I was surprised cause a lot of trainers either bug out and don't let you do that or they make the game unstable and eventually crash but this one didn't. 10/10

ZekeStaright 21 Feb
Perfect! I love how all of them are default under F2 o(>w<)d

b1d1alpha 20 Feb
Thanks for Huniepop 2 cheats. SOOO, needed these. Thanks your team rocks!

RPGmaster200 20 Feb
Thanks to this, it made the game more enjoyable to play.