Our Bloons TD 6 trainer has over 5 cheats and supports Steam, Epic Games, and Xbox. Cheat in this game and more with the WeMod app! 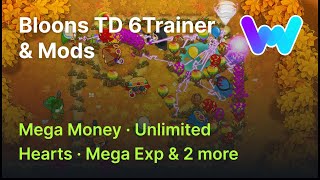 AmbitiousStar816 11 Jan
i last to round 195 bc of this thank you whoever made this hack for balloons i am so happy that i found this this makes the game so much funner i am not going to kie so that thank you guys for putting this appout there thank.

DesiredMarble204 21 Aug
thanks, it is always kind of boring just playing the normal game, so keep adding things. Mabey you could add more towers or paragons, who knows whatever BTD6 mods you make (or anyone else) I will be the first to get it.

RelativePancake528 16 Aug
WeMod never fails to amaze I still think this is the coolest thing ever and hope you guys keep making mods for games. like I can't even begin to explain how much fun you guys can put into some of these game. I plan on getting pro to support this because I think its so cool that you people can do this. You guys have my eternal thanks

AlfieG29 11 Feb
Thank you works great even in challenges and chimps while also allowing just to level up for money knowledge allowing me to play for real anytime i want.In addition the hotkeys are amazzzzing i highly recommend

Very_sussy 21 Jan
Very cool, i've been trying to find mods for this game with my friends for a while but all of the other "mods" gave my computer some kind of virus. Honestly, i don't know how my computer is still running but i'm happy that these don't harm my computer.

SplendidQuilt896 24 Oct
Thanks for the really good mods, I really enjoyed them I didn't find any problems with the mods. And they were really funny to use vs ballons. I really like this mod thank you for making this mod. :D

Tom_The_OLD_m8 21 Oct
It was extremely fun playing with the trainer/mod but perhaps think about changing up the Mega Exp Reward (I think that is what it is called), change it up so that it gives you tons of XP when you earn it instead of when you purchase an upgrade with XP. Just so that people who have already purchased the first few upgrades don't have too spend time too earn XP too purchase the next upgrade/ get the Mega XP Reward.

RazLooa 19 Sep
thank you developer, you are good at making this thingy was that ok? it said to Say Thanks, so i did, uhhh...... it was fun!, could've added a button that just gave you something but, hey, it was still great!

TramKwius 5 Sep
Relatively new to gaming so always skeptical about what I download, even for the non-complex games. This turned out to work smoothly and did exactly what I wanted it to do. Easy for a idiot like me. Safe and easy, what more could you want?

Jacobisus 14 Aug
A -BIG- thank you for this; makes gameplay much more fun and sustainable. Sometimes, you want au-naturel, sometimes you want to have fun and experiment. The only thing missing is a cheat for infinite trophies.

Awt1n 6 Jun
good mod, sometimes does not work though (XP, Mega XP, Unlimited Money, Free Powers, almost all the mods actually) I use it on the steam version so idk if it is exclusive to that and there is a bug for only steam users...

Sxngh 12 Mar
I love that we can do a lot of things with these mods but I would like to request if you can make a mod where there is new towers and you can get infinite monkey money.What I mean by new towers is towers that aren't in the game but you add them into the game

GoldenPanda514 16 Feb
Hey I love this new feature of being able to talk to the developer! Thanks bro for giving me more control over my games. You're a real one. I actually tried paying for WeMod pro, but it keeps saying network error. Anyways thanks again!

Jesus_gaming 11 Feb
i like the cheats you have made. they are amazing and i hope to see more like this. one cheat i am hopeing for is speeding up attacks and increeseing speed of the actual game. i think that would make the game more playable as haveing inf cash and waiting to get to round 100 is pretty lets say, boring (no offence). however the cheats so far have played amazingly. no bugs or issues so far. hope to see more amazing cheats. lots of hope: a happy human :D
END_OF_DOCUMENT_TOKEN_TO_BE_REPLACED