Our Hitman 3 trainer has over 10 cheats and supports Steam, Epic Games, and Xbox. Cheat in this game and more with the WeMod app! 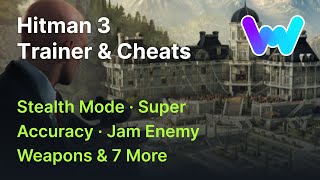 QuickRail154 31 May
thanks for the fun I know it defeats the purpose of the challenge but sometimes mindlessly killing things without consequences is way better for my happiness...if that makes any sense and doesn't make me seem like a complete low functioning psycho...haha

UltimateAvocado448 11 May
thank you so much i think the app is amazing it is so easy. now not having to go on very scetchy websites but with a click of a button you can have whatever you want i highly suggest this app 10/10 one thing to note tho is that sometimes if i enter a game the mods to not work there for i need to restart my game or sometimes my entire computer but other than that im amazed at what this can do. very exited for upcoming updates.

ViableFox633 18 Apr
It really gave me the freedom to mess around with the ai and see how they would recact to things. causing mayhem in stleth mode, running away, then turning it off is really intresting, italso makes you overpowered which has its fair share of fun oppertunities. Apologies for my awful spelling.

FreshRabbit621 17 Apr
wemod is awesome, cheats available for all my favorite games with the most user-friendly GUI/interface i've ever seen. It really doesn't get better than wemod,I am so glad I found them, theyre a 'hiddge' gem

BasicLobster661 16 Feb
Just have to hit 'Play' again in WeMod after the launcher has actually launched the game properly. So far all seem to be working for me.

iTzDeviousxDD 28 Jan
it was amazing, i finally got a live my obsession of killing everyone on the map and walk away like nothing happended

Freddie31 22 Jan
The epic games version of the cheats works with the steam version. Just click the down arrow near the Play button and add the hitman 3.exe from the steam common folder in.

JollyMask480 13 Sep
thank you, this was very helpful to massacre many innocent people. it felt very nice to kill them. thank you.

CuriousOven150 3 Sep
Appreciate this man. I use these cheats to unlock outfits in regards to suit only and silent assassin. Thanks alot!

WildSpider745 13 Jul
Awesome job man, BTW, is there anyway to mod Friday the 13th the game singleplayer mode, since the game is no longer supported?

WokeCook544 11 May
This game right here, masterpiece.Your hacks, masterpiece. everything about this is amazing. Keep up the good work.

WokeCook544 3 May
Just breathe taking. I could feel the air coming out of my lungs in joy while I was playing this. I'm sorry I feel like I have to be more clear, while playing this mod right here, the Hitman 2 mod, my soul was leaving out of my butthole.

OracleIndex 15 Feb
Awesome job! I can't express enough how much I appreciate all the work you guys put in. Don't know what we'd do without you!

KrimsonKaoz 15 Feb
The trainer works very well minus the occasional disconnect from the servers. Usually this only happens like once an hour, but I have had some instances where this issue can happen the moment i reconnect to the servers and then just keep repeating until i disconnect the trainer and restart it. I;d give it a 4/5 stars

QuietSquare824 12 Feb
really good. I just dont like the speed thing because it gets annoying when you have to put it on 1 everytime you want to play it

SimpleDog887 10 Feb
It just works perfectly and gives games a new lease of life with a completely new dimension to the game play. Amazing!

Soul7vn 6 Feb
Very fluid gameplay while cheats were active and no issue when deactivating cheats. Huge help during a point in the game where I was stuck. Thanks WeMod!

itsmescottyb 22 Jan
Ghost mode /Stealth mode is great when you wanna do you a couple of annoying challenges after you've cleared the mission stories !
END_OF_DOCUMENT_TOKEN_TO_BE_REPLACED