Our BattleTech trainer has over 4 cheats and supports Steam and Xbox. Cheat in this game and more with the WeMod app! 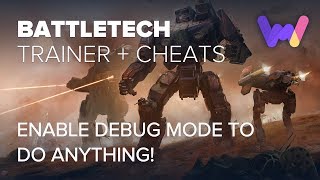 CLKreider 24 Jan
Pretty good, except my recruit pilots took health damage, and mechs got knocked down. so not understanding the "Unlimited health" and "Unlimited Stability"

IsaacWolverine 26 Jun
Thank you so much! Finally beat the mission I was trying so hard to beat. Love the easy fun of stomping on 'Mechs that can't even harm you. One problem, I turned on the unlimited stability but it still affects my 'Mechs because one of mine got knocked.

SimpleWorm881 13 May
First time trying the program, I was and am impressed! Amazing work, thank you for this wonderful program.

DJGaia72 6 May
Working fantastic! Seamless and wonderful, but I would appreciate maybe initiative modifiers or perhaps sprint bonuses? That'd be awesome! Thank you so much.^^

StunningPopcorn149 5 Apr
I enjoyed the simplicity of this tool, it also helps going through story mode greatly. In the early game phases ( which I've already played through prior to this tool ), it helps to accomplish goals a bit faster. Though I have found that using this tool to long slows some of the loading process. Thank you.

OrionKincaid 7 Mar
Very nice Mod, would like to have seen unlimited ammo too but what was available was great! Thank You for the mods!

StaticBranch411 21 Dec
Thank you so much for this mod. It lets me go up against the larger mechs with faster smaller ones. It is really fun. Thanks again!

MajorDolphin706 1 Aug
Infinite c bills has finally allowed me to play this game the way i wanted, and without having to spend another week modding and editing files to get it

DerVikingSpiel 1 Aug
Works like a charm - got me through those impossible battles so I could enjoy the story. Top notch work. Thank you!

LovelyFish203 26 Jul
I lika the cheata like I lika the pasta - full of well-seasoned chicken and slow-cooked over a roaring italia flame :3 Is good

bigevil70 17 Jun
Great job! This game is very hard and your mods saved my butt. Want to have fun and not get tortured. :)

SacredScorpion156 3 Jun
actually gave the 50 yr old a better learning curve for my mod...instead of deadlines and struggle; I had enjoyment and FUN, it would have been great had the developer created a freindlier economic systems I would have done it legit. Thanks for handing the public tolls to get enjoyment from the game with some challenge vs. frustration...there's enough of that in real life.

StaticBranch411 24 Mar
Thank you so much... Those mechs were tearing me appart every mission until I found your Codes! Now I am playing the hardest level with no problems. Again thanks so much.

HotRossBuns 4 Mar
I've been with you guys since before the name change, im not even sure what it was now, its been so long. thanks for the great software.

NutterBudd 1 Mar
Thanks, your cheats were really fun and allowed me to just kinda relax and enjoy the big robots fighting without having to stress over losing pilots like I usually do. Obviously, sometimes I like the stress, but tonight I needed a break.

OfficialTree825 18 Feb
Thanks! I know it's kinda impossible but it's nice if we can set the amount of money we need instead of just a maximum value.

CapableStone838 10 Feb
Greatly appreciated. The money cheat makes the black market actually worth it, and I love the no overheat because I run energy based mech builds most of the time. Thank you so much.

K78LO 4 Feb
Using wemod for games works great! Though i prefered the older version before update(personal taste thing). You would have had to put in a lot and i mean ALOT of time on it! Awesome job mate, thanks to you i can enjoy games i have already played with no cheats and finished just for fun =). Thanks
END_OF_DOCUMENT_TOKEN_TO_BE_REPLACED