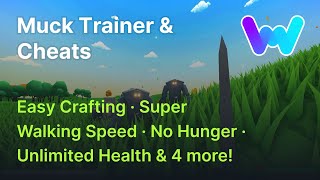 InstantBubble633 7 Dez
It was a good app and it help me allot in some of the games what is nice is it has no ads, 0 ads so it was a good app if i were to rate it it would be a 4 star because not all the games are featured here.

SillyPoison550 10 Nov
it was great! but with the infinite health you should make it unable to drop at all! sadly i lost because it was regenerating:( but overall this is legit. thanks for adding fu- muck

OfficialHorse730 27 Okt
Super cool!!! a little confusing how you have to insert a file but other than that its super amazing! and I'm glad I found this, this is super fun! I don't have to download anything sketchy anymore!!! :D

ActualMonkey47 26 Okt
I would say the only problem would be that you still need to progress in the game to get new thing rather than just having them unlocked but it was also fun having to go out and do things.

SimplePizza908 23 Aug
It was good though i still died to Gronk with unlimited health on had a great experience. All cheats work just fine and i would 100% recommend to anyone who likes playing modded games

QuietTree225 2 Aug
Thank you very much. Everytime I started a new world, I kept spawning under the map, but with the SUper Running Speed, I could finally get in bounds again to actually play the game! I appreciate your work :-)

UsefulChicken734 31 Jul
it was perfect but it would better if we could change our damage in the game and if you are playing with your friends they shouldn't understand how much coins/money you've got so it could be little different but it's amazingi love it.

Evanwillems22437 23 Jul
It was amazing even you know it was so called "imcompatible" with my game version it was functioning perfectly until my fort died after i broke a wall. Big thanks to the dev of this game tweaking platform we need more people like you and your team

ProperHorse327 17 Jul
good job on this it was very easy to install and ran super smoothly.i was looking for a Muck hacked client and this is exactly what i wanted. but to make it even better i would consider having no need to get blueprints. Good job, -Anonymous

dark_dezire 16 Jul
Love, love, love all your cheats... well quite a few. If the economy wasn't in the toilet and our lives dwindling with covid, I would become a full member. It sounds like a cop-out but it's true. A suggestion I would give is that you should have a more affordable price.

Pockle 9 Jul
the mods worked really well. The super speed was really good but you should has a menu to get any material, not armour or weapons just materials so you can still progress through the game

KobraXI 9 Jul
I just recently found out about "WeMod" and this is my first time using it. I have 3 words to say... This is AMAZING. I can't believe I didn't find out about this earlier. :D

FishyFinn 8 Jul
Great mod if possible I think it would be great to have: instabreak/ max damage(lots of damage against resouces and mobs) speed attack(attack speed faster) reach with slider (hit mobs from further away) time of day

LeadingShirt990 8 Jul
this is really useful for the game at the current moment, if you could make it so you can make an unlock every thing hack that would be supreme but i shouldnt expect that. take care.

Thatonlyboy9568 6 Jul
Epic and really enjoyable me and my friend had a lot of fun using these mods and we managed to beat he game rather quickly. These mods were really amazing and hope more people get to enjoy muck in this way!

Snafuw 1 Jul
good trainer to use and everything worked, the main conclusion is that i didn't enjoy the game, not because of the cheats, just because how the game was developed and that this just felt bland to play with..

RadFox34 29 Jun
Very great tool! The only complaint I have is that coins would fill up the inventory very quickly but it was easy to remedy this by getting one stack of 99999 coins then turning that cheat off until I somehow needed more. Otherwise, excellent cheats!

WWL_Hacker 17 Jun
is is me or are these cheats kinda THICC! dani referance lol

AlanS1508 16 Jun
Great, but getting 10 million coins from 'Unlimited Money' is unnecessary. I think you should make it so we can set the amount of money we want. Maybe to flex on others :)
END_OF_DOCUMENT_TOKEN_TO_BE_REPLACED