Our STAR WARS Jedi: Fallen Order trainer has over 5 cheats and supports Steam and Origin. Cheat in this game and more with the WeMod app! 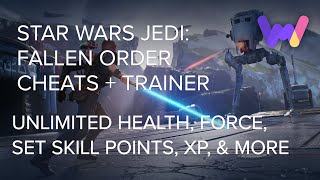 SocialSheep967 30 Jul
Just would like to say thank you guys so much for the content you guys provide. Hope you guys continue to work as hard as you all do. Thank you! :)

ComplexRabbit977 27 Jul
It's cool I just got the pc version but i've completed the campaign multiple times on console but being able to stop and observe the small details made replaying it a whole lot better knowing that the enemies do nothing now.

ViableTurtle484 25 Jul
I gotta say, I was skeptical at first, but I really enjoyed my time playing Jedi Fallen Order because I got to enjoy the story and not have to worry so much about getting killed. Thank you for the ability to do that!

ArtisticGoat744 15 Jun
The game is pretty repetative so being able to play throughthe story is much better. The mods don't help with the puzzles so it can still be a good challenge.

Last_Retro_Gamer 9 Jun
It gave my character an edge, but not too much. I'm playing on Jedi Master for the first time. No infinite health On. The first mini boss is still kicking my butt. Good fun though.

SweetCanvas702 6 Jun
amazing thanks so much for the working mods, hope the come out for more games soon. but it only works for steam games not epic battle.net

SensibleGoldfish278 5 May
I always enjoyed having those cheat kids in gta and other games like a xx b yb yy up down right left left push down then you get stuff but thisbrings it to a whole other level and I love that.

Brokenman20 17 Apr
Great game made even better by some quality of life cheats for those who don't consider themselves gamers and want to experience the game's story.

FallenExileX 18 Feb
thanks. ive spent hours upon hours of failing and dieing, after putting the game aside for year i brought it back out to finally be able to see the story. thank you very much, great job.Im very grateful

SGC_Nightmare 9 Jan
Amazing game, made even better by the mods. Thank you to the creators of the mods! (just wish there was an unlock all lightsaber parts mod)

HeelSide 16 Dec
Thank you! I have the Steam version of Fallen Order and despite the warning that the cheats might not be compatible it still works great work.

Ubervillin 4 Dec
Works just fine despite the client warning me that the trainer might not be compatible with my version of the game, which btw, is the Steam version. Thankee again, MrAntiFun!!

Lightfootlee 9 Nov
the mod works but I had to put the EXE files into the drop down, then I had to launch the game before it would work. It does not work if you try and launch from the Wemod window

SATXMcG 11 Aug
Thank you for making this. It works really well especially for second play throughs where I just want to mess around and have fun.

OpticalPickle421 2 Aug
So glad you made this and that I found it! It's great being able to play thru with the power ups you've provided. Keep up the wonderful work!

MobileKitten950 19 Jul
Thank you for such an amazing game. This is like my 5th playthrough of it, and i wish i could go back to the first time i played it, just to have that feeling again.

EagerMitten895 22 Jun
Follow the instructions and you will be able to play the game. If you have questions how to do what they say, Google how to turn off cloud saves and going into offline mode. Google anything you may have questions about.

TimMarsh 5 Jun
As a Star Wars fan who has neither the skill nor the time to deal with the time-wasting setback loops of a souls-like game, your mod makes the game fun and playable for me. Thank you so much!

KAHUNAPULEMIKE 3 Mar
Wemod is a fantastic way to safely and easily play your games the way you want. Games you have played in the past come back to life.

XaldusTheKnight 16 Feb
Awesome helper, it has been helping me get the hang of things, parrying time, dodging etc. Great job! Keep the awesome work and tyvm for the amazing trainer!
END_OF_DOCUMENT_TOKEN_TO_BE_REPLACED