Our Skul: The Hero Slayer trainer has over 7 cheats and supports Steam and Xbox. Cheat in this game and more with the WeMod app! 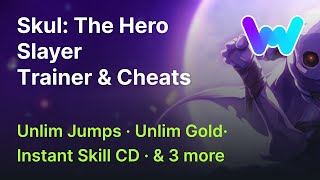 sesshoth 22 Oct
Everything worked, the only things I would like added are unlimited magic/skill, and instant skull change cooldown

JHwho 10 Aug
Still works great after the update! I just used this to get to endgame as I had already beaten it on PS5 AND Switch.... completely forgot I bought it on Steam too.... oopsie

Naksun 27 Apr
Great way to just test out builds for when you wanna play from a fresh game. Least i'll know what to work towards.

ImplicitMonkey444 28 Nov
I used this to practice my God of Battle achievement and it really helped! I have successfully beat the first hero without taking a hit.

RelativeMonkey739 15 Nov
Seems to work pretty well so far, i like the idea of hotkeys being linked to aspects of the mod

ExpertGiraffe566 13 Nov
All codes worked great even though WeMod thought there might be a compatibility issue. No hitches here!

GrimoireWeissDHades 8 Nov
the mods work perfectly, i tried this game on the switch and i could never make it to the bishop boss. but with the pc version and wemod; i finally enjoyed myself.

SocialTiger466 20 Aug
You sincerely have my thanks. I would have NEVER made it through this game without the mods and I'm grateful I got to see the wonderful story line through and through. <3

SocialTiger466 9 Aug
I am amazed at the work done here. A great addition would be unlimited bones. Thanks for the great job <3

ClassicOven460 26 Jun
Mods were amazing, just to give me a bit more of an edge. The gold mod let me pick and choose my artifacts a bit more freely, without breaking difficulty over it's knee!

GoochFiend 26 May
Helped me a lot with learning new things about the game! Kinda hard to learn about mechanics when you die before you can test anything out lol

ImplicitBerry904 7 Mar
Thank you! Used unlimited gold to get the items I want, the game was still very challenging, but it reduced the luck factor.

CoolMoon587 22 Feb
These mods really helped since I don't have a lot of time to invest in games like this and wanted to see the story's end.

GetOgreHere 17 Feb
The only feature that does not work at the moment, is when you activate the "Unlimited Health" mod when Skul is not at full health in the game. Other than that, it works flawlessly. Thank you!

NeatDog119 15 Feb
Thank you. Using the mods made the game more casual and fun when I just wanted to chill without stressing.

GoldenChicken213 12 Feb
awesome ! worked as expected. no bones cheat but i guess there must be some technical aspect preventing it. everything else is as expected.
END_OF_DOCUMENT_TOKEN_TO_BE_REPLACED