Our Second Extinction trainer has over 7 cheats and supports Steam. Cheat in this game and more with the WeMod app! 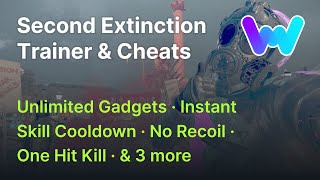 Broussard1111 2 Oct
Works great for the steam version but except when the game is played off the xbox app for pc games with those who own or have the game via game pass. It does not register the game under "avalanche studios" folder that it automatically generates.

baaya 7 Aug
Having a blast with this tool.

CharmingCanvas190 4 Jul
Finally a Trainer that actually works as intended with no side effects and its free too? That's a plus in my book

LynardMoss 1 Jul
works for most things. The unlimited granades did not

dancerjake 8 May
Only the weapon cheats worked, but they worked nicely! The other cheats will need an update for newer versions.

annettered 5 May
Most of the mods aren't currently working, but the weapon-based mods ran smoothly. No spread, recoil or reloading needed was fun, to be certain.

xqces 4 May
Works good but everything other than the weapon cheats are outdated.

Churchly 24 Apr
Thank you for these cheats. It's a lot of fun to play with friends but for when I'm alone and just want to bang out some contracts, this is perfect.

StaticFire0 2 Mar
it needs to be updated