Our KINGDOM HEARTS II FINAL MIX trainer has over 26 cheats and supports Epic Games. Cheat in this game and more with the WeMod app! 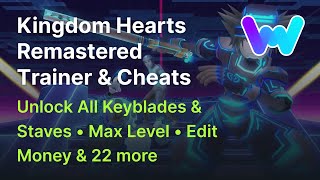 BigManQuandale 7 May
Yea, its really nice overall, perfect when I had trouble trying to fight Lexaeus at a lower level. Also, will you consider adding a chain of memories mod? I'm having trouble with that game too.

Trycho 24 Sep
Great job! You guys have found a way to make it a breeze to play games, while still finding things to earn on our own.

WildAcorn950 1 Aug
Even after a game update, the mod still worked great.

PowerfulRing692 19 Jun
I love what this has to offer but more would be better. Such as being able to use forms without any party members.

ErikMVenegas 13 Jun
Another very well done menu, just wish there was an unlock all abilities and an exp booster for drives and summons

RedGeneralX2 25 May
This really helped me for setting up my data battles drinking games with my family without having to 100% everything again.

Retro_Boy 13 May
Would it be possible to have the ability to enable all max leveled drive commands? That would be awesome!

TuffyJuice 7 Apr
Love it! Thanks for letting me enjoy the story without the grind.

EagerShoe975 7 Apr
thanks, there were some bosses that didn't work with it. but otherwise it all functioned easily

Chromosomeburgler 7 Apr
works well except in the ballroom fight in beasts castles, completely breaks game if you use cheats there

JMacSuave 6 Apr
I really appreciate all of the hard work you've been doing over the years!!! You've made my gaming experiences so much more enjoyable. Thank you!!!

PaopuWayFinder 6 Apr
it was cool, never played with mods on the og game that had emulator with emulator mods you could install

WokeAcorn147 5 Apr
it be nice to have something to level up drive forms. because the cavern of remembrence is a load of crap. thanks for the cheats though.
END_OF_DOCUMENT_TOKEN_TO_BE_REPLACED