Remnant: From the Ashes cheats

Our Remnant: From the Ashes trainer has over 16 cheats and supports Epic Games, Steam, and Xbox. Cheat in this game and more with the WeMod app! 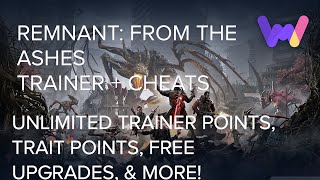 annettered 21 Dec
Everything worked like a blessing. WeMod takes an intense and struggle-filled trial and makes it a casual and power-filled experience.

Discokrieg 18 Oct
Disclaimer: I have ran through the storyline, content, and every boss this game has to offer before enabling these cheats. These mods have made my single player shenanigans an absolute blast and made it much, much easier to get the survival boss in a row achievements. They all work, they all work wonderfully, too.

LexicalStar736 14 Oct
Works great, only issue I have is that for some reason the banish mod doesn't seem to function correctly though I don't know for sure if thats the cheat's fault

IndirectCoder591 4 Sep
Thanks for making this - prevented me from spending more time on the game than I would like... Hope life is treating you well

Lakos 25 Aug
Makes playing single player for the story fun. Not very good at these types of games, but I enjoy the gameplay/animations/story

annettered 8 Aug
It's easier to be invulnerable, without a doubt. It also feels nice to be able to punish a terribly difficult boss with an impossible to stop opponent.

ThePlasticHero 21 Jul
Works well I can max out stuff before even just starting for the fun of it :). still turn it off for multiplayer to be fair though>

jrockstar711 25 Jun
Newest Version of Remnant: from the Ashes. WeMod states that cheats may not work with this version. It crashes a few times on startup of the game, but eventually works fine, cheats and all. Love this Tweak/Mod for games. You guys are definitely onto something, and $5.00 a month is well worth it for any gamer. Excellent guys! You should team up with Microsoft Games, or Apple Arcade, etc.

Grizzlemaw 25 Jun
After my data got corrupted I was really hesitant about starting over again. You're trainer aided me in getting back to where I was easily and in short order. Thanks a bunch!

Diablicity 28 May
all the mods worked amazing thank you. i did not want to restart this game entirely on pc as i played on ps4 for countless hours and these mods helped me get back to where i was real quick.

SwiftDuck519 27 May
This is a really great app, Thank you for making this, it is much easier than figuring out how to use cheat engine with this game and not trigger the anti cheat

Tonyynot1 19 May
Thanks, really was enjoying the game until I hit a boss fight I was never going to win playing solo. Now I can continue on, finish the game hopefully and get to the DLC's I purchased

annettered 1 May
Always loads of fun, and it's kind-of exciting that you can still die with the one hit kills on the hardest mode. Having unlimited ammunition completely changes the tone of the game into favoring a gunslinger play style. It's completely a blast, and makes it so much easier to progress in the story. I loved it, it really is worth trying out for a mass of fun.

Diapered_Bunny 23 Apr
Confusing app from Wemod thanks to the lure for Pro use on hovering over enable/disable, but once you realize you can use the keybinds it works pretty well. :)

MightyShoe698 19 Apr
Worked like a charm! Wanted some extra trait points so me and my friend could be on the same lvl when we're gonna start campaign all over again on apocolypse! Awesome work!

DailyGameBytes 17 Apr
Thanks for creating the trainer! It's great that I can use it with the Epic Games Store version since that's the version I own.

ThighHighSamurai 12 Apr
The Undying King is a poorly made boss that relies on artificial difficulty rather than skill testing design. It is predictable, slow, and not difficult to fight. You know what is? Drowning me in undodgeable attacks and redundant hordes of enemies, and a bullet hell environment. Nah. Infinite health and a sledgehammer later, I knocked the devs incompetence into brazil.

JuganJiDyso 10 Apr
Mainly functions as intended and is very beneficial, Mega Exp seems to be the only thing not working but it isn't too important due to Unlimited Trait Points working just fine.

Sal1002 29 Mar
great cheats,easy to toggle / use while playing,only thing that it does not have that i want is the ability to add weapons and armor to your inventory instead of needing to find it.
END_OF_DOCUMENT_TOKEN_TO_BE_REPLACED