Our GTFO trainer has over 8 cheats and supports Steam. Cheat in this game and more with the WeMod app! 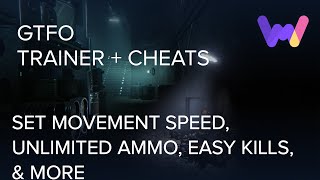 OfficialStar775 20 Aug
Official Star, i love you man. You genuinely made this game a whole lot better. I play solo with every game that i play, and you honestly made the game very enjoyable for me.

ImprovedRoom826 20 Jul
As someone who doesn't have a regular group to play with, and isn't comfortable playing with random pubs.. I really appreciate being able to play through the last couple levels my group can't finish, and get the rest of that sweet sweet lore.

UrgentPurpose459 9 Jul
Thanks, for the unlimited ammo in this game, makes it a lot easier especially when I was playing with my newbie family members

sondavid123 16 Apr
good mod, could use some fixing, the unlimited health and the one hit kills no longer work unless it only works in single players

Sp4ce_Raptor 5 Mar
It was awesome but the only problem i had was that the unlimited health didnt work, neither did the one hit kills for the most part.

UsefulLeaf227 31 Jan
Thanks man! it's ironic your name is AntiFun when really, you provided me so much with your work through the years. Often cheating so called is a way to enjoy a game in a completely different way, and that's true for GTFO, where the gunplay is so good, and sometimes you just want to hang out with a forever horde and shoot for a while instead of extract.

InstantCat159 28 Jan
welI got to experiment, this will also help me with other experiments and trolls with my friends I thank you for the time you put into this and the good will you have to share it

SpecialHotkey814 25 Jan
awesome! you guys are LIT the only reason why i downloaded this is because i can't finish GTFO by myself so it led me no choice

CasualAcorn777 20 Jan
pretty useful application, just wish there was some kind of override to the controls for the bots as they are as dumb as bricks in game

Shade64 13 Jan
Thanks for your hard work people! Really helps when one has so many good games but some of them are just too hard [for older reflexes lol]. Anyhow, thanks again. Keep up the good work.

FairMask792 5 Jan
pretty good mods, only thing ive noticed is some rubber banding with the run speed, that may just be my connection though

MagicalSquirrel346 3 Jan
Thank you, finnaly I could kill these bastards without any problem, I really enjoy the hunt on them! Works great!

LinearTiger718 25 Dec
THIS IS COOL, only issue though is the "one hit kill'' arent really one hit kills and the 'unlimited health' needs to be changed to 'unlimited medkits' cuz i died thinking i was immortal

IntenseBear9 25 Jun
Amazing work this time around, every effect works as intended. Only complaint I have is that there is no option for crawl speed, or jump height. Other than that, as I said, perfect job!

FamousCanvas698 3 Apr
I now have a good view on how the first level is and many of the game mechanics. i think I'm ready to play legit with friends now!

ModestSail430 22 Feb
First time trying it, works fine, very useful... Played for hours but not finished the game... Cause I might try finishing the game later with friends...

IntenseBear9 17 Feb
Only problem is recoil. Just that! Other than that, its PERFECT! I would like unlimited ammo special weapons to work on turrets, but that's all I have to say.
END_OF_DOCUMENT_TOKEN_TO_BE_REPLACED