Our Dead Space 3 trainer has over 6 cheats and supports Steam, PC, and Origin. Cheat in this game and more with the WeMod app! 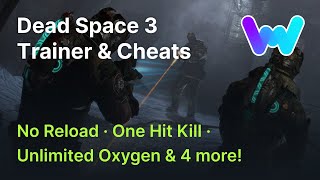 SwiftChicken778 24 Dec
thank you very much respected developer . but it will be more fun if it remain free

PlainSail373 29 Nov
that was a super nostalgic experience man, just ballin out with a good gun off the bat was a lot of fun

ProperBubble375 25 Sep
Thanks for creating such as wonderful mod. I look forward to using WeMod many times in the future.

VRev4123 26 Aug
I've played this game so many times but never with cheats on, actually it takes away some of the pressure of getting items and such and just being able to enjoy the atmosphere and story is really cool. Thanks.

Zombiekiller3121 9 Jul
Thank you for making these cheats. They have saved my ass quite a few times in game while playing alone. The only thing I could think of to improve it is to be able to manually set how many resources you have in your inventory instead of having it locked at 99K, though it is a pretty generous amount that can be refilled at will. Luckily, I have another game exclusive trainer that takes care of that for me so it's not that big of an issue.

EndedReality 25 May
Everything i tried so far works wonders. I'm surprised they fixed unlimited resources.

Dwagyn 24 May
Very well done! Side note - infinite ammo makes infinite inventory items. I couldn't drop anything without turning it off.

camf33 11 May
Awesome.. especially the 'One Hit Kill' for those that have completed the game and just want to run quickly through the story. Kudos!

AcRonBunBun 22 Apr
thank you so much, as i said with other games you make it fun to come back and just be nostalgic from every jumpscare and the graphics thinking this was a game changer then.

OneWhoWokeUp 18 Mar
Cheats work well but for some reason the cut scene where you first meet Ellie doesn't activate with one or more of the cheats on. I had to leave the area turn them all off and that worked.

psychosteve 14 Mar
Good mods. Really useful as DS3 brought this awful resources aspect in to do any upgrades.... Tedious. Thanks.

HonestBee286 7 Mar
Fantastic, though the arc welding pistol doesnt get infinite ammo, as well as another gun or 2. Aside from that, wonderful!

WintersRapture 17 Feb
Thanks for getting the bare bones up. This is a long time favorite of me and a few friends, super happy to have this support. Great Work!

LordDaily 12 Feb
Great Mods! It really helped me blast through a replay. Keep up the amazing work! And, Thank you.