Until We Die cheats

Our Until We Die trainer has over 16 cheats and supports Steam and GOG. Cheat in this game and more with the WeMod app! 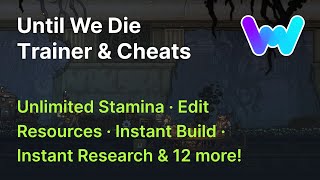 ero521 29 Jan
Thank you for the hard work in making this trainer!

JTehra 29 Dec
Man some games are really hard for me, but just with that *tiny* bit of help makes it just a bit better to play, thanks Wemod.

GilThief 9 Nov
it works like it says on the tin

RelativeShade945 26 Aug
Really Love this one Thank you! :D

RegularBucket688 7 Aug
thanks , its worked , finally i can finish the game .

ModestQuill174 5 Aug
thanx make the game for me much more enjoyable :)

LivingBubble269 28 Jul
it helped me finally pass until we die. thank a lot

ImmuneSeed721 20 Jun
until we die still working after update

ConstantPuppy862 18 Jun
The game still in early access so its not really balance out thats why im here, i brought the game on steam to show my support. everything went well except for some glitch when you built the cog icon still remain on the top of the building.

ClassicalQuilt918 14 Jun
This was very intresting, regardless i cant wait to see what more can be added to this game by the devs

Damocles80 10 Jun
Works great. The only thing I would change is the "Edit Scrape,Food and tech" as it limits the game to 10

Betagaminghd1 10 Jun
this game is great, hope more maps and characters are released