Our The Tenants trainer has over 8 cheats and supports Steam. Cheat in this game and more with the WeMod app! 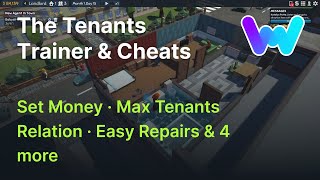 WittyBumbleBee 21 Mar
thank you! you guys are doing an amazing job with these!

naymardoyle 22 Jan
awesome but needs a mod for fast cleaning!

craterface 27 Oct
Great! Needs to be updated but still good :)

HiddenBubble345 16 Oct
Makes the creative side of the game playable

ArtisticRail994 1 Oct
works well!Thank you! I've been playing for days and have gotten no where.

AkiraKitano 31 Jul
Thanks a lot for making this game a lot more stress free!

MagicalAnt501 17 Jul
Thanks I can build my dream home with this mod.

Hixlem 26 Jun
Works well, should be an option to increase the negotiating amount and make them 100% agree with the price.

PopularEagle189 1 Jun
The trainer did as advertised. Thanks.

HiddenBubble345 23 May
Helps with money. Really hard to get good houses in game without cheats. Other cheats are good too, but having the money makes games more fun.

Wyndust 21 May
Ran awesome but the only thing that broke was the "mega job exp', I do not know if it is just me but all my exp would go negative and i was not able to gain any after that

HunterRobi10 28 Apr
Awesome Mods, Trainer, isn't working due to an update on the game.

AIRWAVE7 26 Apr
Thank you for this mod. I have only encountered one issue to speak of, and it's kind of a big deal. When I used the mega XP mod, it reset my level to lvl 1 and is giving me a negative percentage to unlock anything in the millions. If there is any way to fix this it would be much appreciated. Thank you.

PureRadience24 24 Apr
Thanks so much for this mod , when I bought the game i was really praying my wemod membership would come in handy and thanks to you it totally did ! you're awesome keep up the great work!

NUUKK3D 13 Apr
Using Trainers By Mr.AntiFun Since 2015, Never disappointed. WeMod Partnership made it easier to follow up on new trainer releases. Thanks Mr.AntiFun and WeMod Devs for releasing great trainers for games.
END_OF_DOCUMENT_TOKEN_TO_BE_REPLACED