Our Resident Evil 7 trainer has over 6 cheats and supports Steam. Cheat in this game and more with the WeMod app! 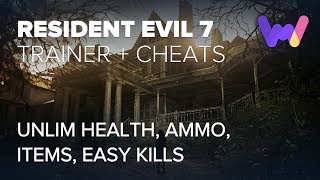 PerfectRiddle719 7 Feb
Literally zero cheat tables (Cheat Engine) work for RE7, which is what introduced me to WeMod after days of searching; seemingly the only external cheats that will work for this game. Thanks dev (team?), did NOT want to spend a lot of time farming resources and not having item space etc. 10/10

soulxplayer26 20 Jan
This mod was the excellent choice to make when playing this game. With the ability to use unlimited ammo and unlimited health make the game a peace of cake that you can enjoy.

SupremeSnake441 13 Jan
I love the RE story but I suck at video games. You may think 30+ years of playing them would've helped, and it has. Not as much as infinite ammo does though. Thanks for the assist!

MightyFish963 11 Oct
i forgot to turn on the mod at first but THINKING that i had it on gave me the confidence to beat jack, it is very fun thank you

asiann 5 Jul
It's so fun using it in madhouse and easy mode but Not A Hero DLC is broken the ammo keeps multiplying to were your inventory is full and you have to keep going back and forth to the box.

asiann 30 Jun
The hacks is so amazing that I enjoyed playing with them! If you're trying to turn on the hacks and it tells you to upgrade to pro, just use the keybinds on the sides and they'll work. I'm a new user to wemod but now I know how to use the hacks. Thanks! Wemod and MrAntiFun for creating this!

KennethLuque 18 May
I always die on games since I play rushing. Having Unlimited Health and No Reload made me be able to play the game and not have worry about dying or anything. Thank you for the mod!

SethPDA 15 May
Cheat works great, except when using god mode, bosses do not take damage. This happened to me for Jack, and Evelyn, but not for Margaret.

AmanteNomadstar 12 May
Thank you for developing the Trainer for Wemod for Resident Evil 7. As a parent who doesn't have a lot of extra time, mods like yours allow me to play games I want to play at a faster pace so I can get the most from my gaming. Cheers!

BoldSnail450 5 May
It was good but i feel like if you have unlimited health on the bosses cant die, thats what happened with me at least. other than that it was great!

AmbitiousHat391 28 Apr
Everything worked great! Made the last little haul quite a bit easier for a coward like me! The only issue I encountered was that I wasn't able to progress on the final boss unless I turned off mods, but it was pretty easy even without the mods!

ArcaneEther 1 Apr
One of the codes did not function as expected. The "Unlimited Health" made both me AND all enemies invincible. Had to turn it off to make progress.

DuggahDante 14 Mar
Works great mostly! The only problem was boss battles and destroying bug nests needed Unlimited Health turned off to progress, though that may be a game failsafe.

YoungHuttonYT 6 Mar
Was a great experience with infinite ammo and god mode, only thing is is that the FPS starts to get a little choppy when your later on in the game but otherwise it was good!

ModernWindow685 28 Feb
Great and doesn't actually hurt the experience as even with unlimited supplies, I still didn't feel safe thanks to the game's atmosphere and design, but I have a few complaints... The Unlimited Health cheat affects certain enemy encounters like bosses and Marguerite's insect hives, even resulting in a game-breaking glitch during the second proper fight with Jack, wherein even with the chainsaw, he was unkillable, even AFTER turning off the cheat. Also, the Burner's ammo count still needs to be watched as the 100 count given to all items through Unlimited Items/Ammo isn't enough to replenish the Burner's 150 capacity on reload. These are minor gripes, but I can live with them. Great trainer!

joejoe28 25 Feb
As always, killer trainer. I usually play the game once without cheats. Then the second or third time is so much more fun! Thanks for you time and effort in making these games worth it.

EpicBerry539 8 Feb
Pretty Good but one complaint was when fighting Marguerite and you activate Unlimited Health she also has unlimited health that's the only complaint :)

Yxnrn 29 Jan
I've been playing RE7 for a few days with mods now, and all I can say is that this is a great modpack! It would be better if there was an instant kill for mold monsters, and try to fix the bug on Unlimited Health because when it's on, you can't fight bosses e.g., Eveline, Mia, and others. Other than that, amazing!
END_OF_DOCUMENT_TOKEN_TO_BE_REPLACED