Our OCTOPATH TRAVELER trainer has over 8 cheats and supports Steam and Xbox. Cheat in this game and more with the WeMod app! 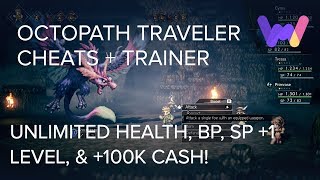 BigChangp 1 Jan
Great! Keep up the Great work! i don't know how you do it, but keep doing it.

LivingBox633 10 Nov
thanks for the cheats its really useful on replays to skip the grind :)

jaysnowbear 3 Oct
all cheats are working perfectly. This is a nice mod, kudos to the one who made it :)

Gamergirlcheatpro 19 Aug
Only used 1hit kill and game speed adjust for fast levling. Works nicely. one time game froze when I was testing the speed slider, I spammed it fast up and down. Never happed again but Im not moving it to fast anymore. Semi fast worked well also.

ZuraKatzura 15 Jul
The HP mod sometimes also affects the enemy, but other than that everything is great.

WatcherCCG 13 Jul
As I've already played this game on the Switch, being able to rapidly catch back up to my old progress using this trainer has been a boon.

ob1alex 1 Jul
I play this game on switch, never got to play it more. Since it was hard and all, but I discover this wemod and thought i enjoy the game more with cheats on

ExpertPuppy686 26 Jun
Amazing cheats! I can finally enjoy the game instead of grinding :D

IdealPickle970 17 Jun
Works like a dream most of the time, sometimes though the unlimited health glitches out and you die. rarely though so its ok!

snesmaster 24 May
Thanks, the Unlimited Heath worked great on a Boss I had been stuck on.

ramrod83xx 15 May
I have do not have a lot of time. So these options let me enjoy the game. I would recommend a how to activate cheats prior to starting a game.

BraveShirt285 13 May
i didn't want to grind for money by running in and out of a cave for hours, and this sure did save me that time

remnoidzz 12 Apr
The infinite gold cheat was the one i used nad it worked. Thanks for this!

ExpertRock162 7 Apr
One hit kills works well and allowed me to level grind much quicker without using unlimited exp to make the game too easy.

Valial 3 Apr
No issues , i had it running for more than 50 hours in a row never crashed or caused any problem.

GrandDeer757 31 Mar
This is so amazing! You can literally mod hundreds of games and get unlimited stuff! Best Developers ever!!!!

hahaman4real 30 Mar
Thanks for the quick windows store trainer for this game.. Hopefull you do more for windows store games
END_OF_DOCUMENT_TOKEN_TO_BE_REPLACED