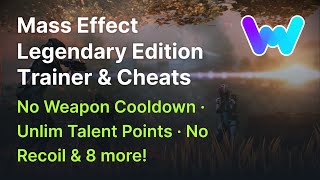 KinkyWiggles 15 Sep
I was able to enjoy Mass Effect with your cheats. I can't really play it without health mods, because I get distracted easily and don't watch my radar. Thank you for helping me play this.

LifeInsurance 28 Feb
Thank you so much for your hard work. It really is appreciated. I've only tried the unlimited omni gel so far, but it works like a charm. Again, thank you and stay safe!

stevemboise 26 Feb
Great job. It's almost like playing Mass Effect again for the first time. The nomad is so much better to drive in ME1 than it was, bouncing all over the place. Visuals are good too. Can't wait to get into ME2 and 3.

Jurais13 13 Feb
Everything works as it should however, the unlimited talent points do not stay from mission to mission. You have to either go in and assign all the points again or do an auto level before each mission.

VividKitten490 19 Jan
As a pensioner, I appreciate having help. Now I can enjoy the storyline without being too concerned about fighting and testing my reflexes. Couldn't have done it without you.

AbyssalSeaweed 2 Jan
Having beaten the entire Mass Effect trilogy several dozen times over the years, being able to breeze through the first game without much of a grind is a godsend. If I could (and if we weren't in the middle of a pandemic) I'd give you biggest of bear hugs. But for now, I'll just settle for a digital high five. Kudos to the dev.

PlainAvocado781 27 Dec
Thank god for the squad points cheat. I've played ME2 about 4 times but on console instead of PC I don't think I could stomach doing a playthrough without fully upgraded abilities lol

tchandl1 7 Oct
Great for staycation situations where you have obligations to elderly family and friends all but family that keep you close to home and who have needs you might have respond to ASAP at any time. You can do well in a game in a short period of time while basically on call and conveniently located . You can go back to an old game you haven't played in years or a new game. Explore a different world without wasting hours and being so frustrated when you have to leave and try to pick up days later. Your programs are therapy dogs for people tethered to the harsher realities of life.

Garridonjr 9 Jul
Correcting the mistake of a Global Skill cooldown and the introduction of weapon clips makes this game amazing. Thank you. I am having one issue, every time I level, my abilities reset and I have to completely spend all of my skill points again...?

Karallys 9 Jun
overall no issues occasional crash but still good expierence...except i somehow left teh mako behind when i shouldn't have and now wish for run speed...not creators fault

DGMuln 1 Jun
Works like a charm. You may need to change the key bindings though. It interferes with the the game's built in key bindings. I'd recommend using the numbers in the number pad. F1 F2 and F4 are the only ones that I noticed that have some overlap.

ReeWyre 29 May
Played these games so many time on console when I had free time. The cheats are literally just time saving & QOL improvements making it possible to play this and work a job.

MajorParty844 25 May
Solid performance all around. Although the Unlimited Ammo is deceiving as the count for clips in Mass Effect 2 still goes down during use, but you can infinitely reload.

ChilliCheeseDogs 24 May
Really well executed, only issue is one hit kill projectiles on harder difficulties still insta kill you but that's expected. otherwise flawless for ME1, haven't test 2 or 3 yet...

KleeLeHorgen 24 May
Great job! Unlimited health isn't broken and every cheat works. If only someone could fix the audio randomly cutting out constantly! It's been a bug since the original PC port of this game. haha. Thanks again!

SillyPencil610 22 May
Thanks so much for taking the time to put this together. The Mass Effect series is my favorite sci-fi game series.Your mod allows me to get back into it with my favorite parts quickly. Thank you!

Holoptic 19 May
this mod works perfectly! the unlimited grenades seems to not work as well as I would like, maybe it had to do with the thorian mission but that is the only time i experienced any malfunctions.

ConstantChalk389 17 May
Didn't expect much, since a lot of trainers end up breaking/being fake. But this is a pleasant surprise, keep up the great work. (Honestly, if BioWare thought us veterans want to fully replay something we replay a lot with cheats just for fun because it looks new, they were kind of silly)

animeluvrguy 16 May
It's amazing! I love that I can use it whenever I get stuck on something that gets me frustrated. Only wish that there are cheats for the less popular games, but I this is software is great. Especially when it keeps the cheats up-to-date.
END_OF_DOCUMENT_TOKEN_TO_BE_REPLACED