Our Just Cause 4 trainer has over 14 cheats and supports Steam, Xbox, and Epic Games. Cheat in this game and more with the WeMod app! 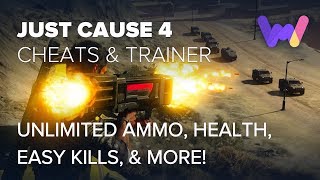 protopod 2 Nov
It does what I need it to do, which is to stop enemies from shooting me. It's almost impossible to do missions when never-ending hordes of them are doing that.

AbsoluteBird516 6 Aug
so easy, thank you love how simple this is, great for getting out of little stupid situations or just pounding through a game

PINHEAD442 26 Mar
Very cool. I was skeptical and figured I was downloading a virus or something. I was very wrong and extremely happy to be wrong.

OriginalGiraffe390 29 Jun
unlimited health is good but when vehicle exploded, he'll go into this slow motion which took forever to end. maybe need this cheat also. thanks

agentphilip07 28 Jun
it's good. the only bad thing is that the epic games version (the one i have) doesn't have as many features as the steam version.. :(

Talonic 22 Jun
I only use the freeze timer but it worked perfectly, and solved my frustration of the timed 'stunts'. Thanks for the great trainer.

Ge_Wiz 15 Jun
Seems to work pretty good most of the time except when using the infinite health (the ragdoll mode doesn't end and you have to restart from the menu screen which is not that big a deal). Guess I just need to get more good

NeatDust791 29 May
It was all good, except for I died whilst I had full health, when I was in a truck,I was forced to close game as I was stuck in slow-mo

Daveox 27 May
mostly works on steam but glitch if using unlimited health and get exploded, slows down everything. otherwise works great

LivelyHotkey695 23 May
its fun but there is 1 problem when using the infinite hp mod. if your in an explosion the game thinks you died and slows down time and softlocks you so you have to restart the game. and when you use the infinite wingsuit boost you cant turn it off your boosting until you use the hover bord or parachute. aside from that the mods work perfecly :)

MetalNova 30 Apr
Works quite well for Just Cause 4. Has some quirks but once those are learned is great fun for this game.

AmpleThunder604 28 Apr
It was really fun and the mods I used which was unlimited ammo,vehicle boost, and no reload worked flawlessly, no recoil I wasn't sure of and couldn't tell. If you can please add more mods to the epic store version of just cause 4. Its very limited compared to the steam version. Thanks for everything

LizardKing159 27 Mar
Game works well, do not recommend using "instant hacking" this hack will ruin the ability to "transmit data.'

GRIZZLY1984 12 Mar
Thank you very much for making this trainer program, and allowing a free option. I don't believe in subscribing for things that aren't movie/TV streaming services, so I really do appreciate not having to do so, in order to use this program. Thank you and keep up the good work :)

QuantumEntanglement 17 Feb
Easy to install and use, never used a trainer until now,and I'm quite surprised, I would expect games to crash, and now I don't need to do extra stuff get mods on games from the Epic Games store.

StingerPHX202 12 Feb
WeMod works great in JC4. I really like the cheats available for this game, it allows for fun tricks.
END_OF_DOCUMENT_TOKEN_TO_BE_REPLACED