Our Teardown trainer has over 5 cheats and supports Steam. Cheat in this game and more with the WeMod app! 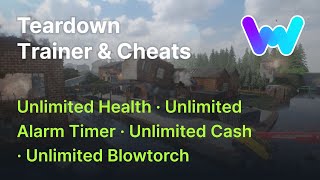 MarkusTheShadowWolf 5 Nov
although I got the game from steamunlocked.com, it was awesome, can't wait to see more cheats ;)

AbstractMouse943 22 Feb
Its good in all but... I wish there was an unlimited level cheat, if there was it would be so cum-sensational.

ParallelBranch298 30 Jan
ngl theres mods in it that does everything in this but better, but thE MONEY THOUGH HOHOHOHOHO THATS GOOD

Multhar3490 7 Jan
Thanks to this i don't have to worry about dying everytime i try to watch an explosion close-up. Thanks.

ZenLo 13 May
thanks m8 it runs great although a couple glitches n stuff but enjoyed playing it none the less. I hope you keep up the great work and have a blessed day!

LiquidWorm521 16 Mar
Thank you so so much Sir. I really appreciate your work and your commitment into making WeMod availablefor everyone. Thanks to the WeMod Team!

ViableZipper453 7 Mar
I personally do not like that this program asks me for a review every single time i open/close the game, but overall it was a good experience using it because it gave good cheating options.

DynamicSponge244 5 Mar
Brilliant for getting a bit more out of the blowtorch but i wish it worked with the other tools as well. Also the unlimited timer feature doesn't work, so that's a shame.

IntenseChicken258 20 Feb
alarm timer didnt work. Might have crashed missions. not sure if it was the mod or the early access game

MeOhWaitIAmNotMe 18 Feb
Its pretty good timer works if you put that thing in discussions in your heist.lua or time doesn't work in game and thanks for making this its annoying with the timer on the game

Von_Dankenstein 13 Feb
Most of the cheats work and its enjoyable but the alarm timer cheat is a gamble as to it working, and maybe an unlimited tool (which would include ammo, planks, and bombs) cheat would be more beneficial than just unlimited blowtorch. Still it's alright so far.

OptionalDolphin945 13 Feb
the hacks are in testing but godmode works fine but since last time i used the alarm timer stopper it didnt to anything and instead prevented the level from ending.

Llamanade 5 Feb
Thanks so much, it was a lot of fun. The Alarm Timer cheat doesn't work atm but I love it :)
END_OF_DOCUMENT_TOKEN_TO_BE_REPLACED