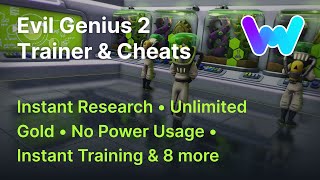 MostComplete 1 Feb
Had trouble at first with the MOD but with a little adjusting with my Computer setting and the Phone app I managed to get it to work. Don't know or unsure why it would NOT load the cheat MOD at first...

FinalShark963 20 Dec
You're doing a great job. If i didn't have you, I would have to actually get good at games which I do not have the time to do anymore. Xoxo, love you forever.

BluBoy98 24 May
Very enjoyable. Will say the power mod does glitch and won't return to normal values. Otherwise everything was okay.

Void_Keeper 9 May
the hacks are good but i would tinker with the infinite stats one... it causes the ignore expeditions orders... and max power if touch once is final... it would be better if the power generated left when the hack is turned off

LostDog377 2 May
Everything work great! Thanks! There is a graphic glitch when you use the Unlimited Gold If you turn it off the gold in the vault doesn't fill up like it would normally, but still works great.

FierceOreo 30 Apr
Thank you so very much for all your hard work and efforts. Also very grateful for the quick and timely updates. Thank you.

Winter_Mute 13 Apr
You did a great job. Thank you. Would like to suggest a way to have an option that gave money in 50k increments instead of maxing to 5m. My experience with the unlimited money was a constant stream of "Your vaults are full." and "you don't have enough money for construction."

CheckSix 9 Apr
I really appreciate the work you guys do at WeMod. Sometimes games are impossible almost to pass a certain point, you can just go into God mode and then remove it once you pass the obstacle. It has saved me a few times from deleting games.

Kuwi_The_Messenger 8 Apr
All that glitters is GOOOOOOOOOOOOOOLD!!!!!!! Only shooting stars break the MOOOOOOOOOOOLD!!!!! But in all seriousness I love the updated trainer, everything seems to be improved on spectacularly.

theedoe 8 Apr
Works very well! Good job! Would love to see cheats that only affect the Genius. For example, Unlimited Stats is split to affect all or affect Genius only. :)

CompetentSnail697 8 Apr
thanks for making this! if you dont mind, id like to make a suggestion. add a slider to speed up the game. another idea: all items unlock. and last instant travel on the world stage. (also fix unlimited stats please!!)

EpicCoat242 6 Apr
Great stuff, WeMod changed the game for me. No more searching sketchy websites for individual trainers is wonderful.

TaiKorczak 6 Apr
You've made defending the lair much easier with the stats mod. I couldn't stand losing 20+ minions to super agents anymore.

Kuwi_The_Messenger 6 Apr
Good but could do with some... Improvements to the DX12 version... [Toggle] Instant Cool Down [Toggle] Loop-Activate villian ability *Needs villian / henchman ability primed and instant cool down. [Toggle] Infinite Morale [Tweak to existing one] : 999 million gold instead of 500,000. [Toggle] Max unit cap becomes 1,000 [Toggle] Minimum heat *for those who want a little challenge but not too much of one.

RegularHorse252 3 Apr
Only used the power and gold, and gold worked fine. Power had some issues turning off though, I was still at max power after turning the option off. Wish there were options for Intel and Fuel though, but other than that it's great!

SpecialPancake664 31 Mar
Your a legend mate, thank you for the Trainer. I loved this game as a kid and im loving the new one. Thank you
END_OF_DOCUMENT_TOKEN_TO_BE_REPLACED