theHunter: Call of the Wild cheats

Our theHunter: Call of the Wild trainer has over 26 cheats and supports Steam. Cheat in this game and more with the WeMod app! 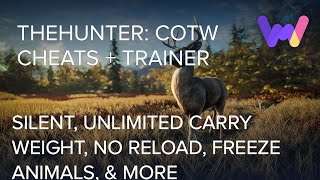 Wargrunt 5 Jun
Sometimes it is just fun to practice hitting heart shots by having your target stand still for you. This makes it possible to do all kinds of wacky stuff.

ClassicBucket693 5 Jun
Good But it would be nice to be able to adjust speeds. Also fast movement in crouch especially is very bouncy and in both crouch and standing often you fall/go backward on any small slope

ClassicBucket693 4 Jun
OK but there is a lot of bounce, of the play, when moving fastin any position.Really need a faster weapon load and aim function as by the time something loads and aims the game dies of old age or just wanders off hahaha

ClassicBucket693 1 Jun
Fast move put me right into the path of a Lioness. I have just enough time to draw my pistol before the killed me everyway from sunset :(

KZR_Kevzter 14 May
I just like it because I haven't played theHunter in a while, but in other words, thank you for creating WeMod, you guys are legends!

InstantCat963 27 Apr
Very fun and entertaining. Watching ducks unaware of the horrors they're about to witness is fun. I've gotten two piebalds (rare fur typed animals) out of it in the last 10 minutes.

ModernSquirrel877 31 Mar
I'd love to see new mod options, and I believe there is a HUGE community following this thought as well. 10/10, if theres even more options, 12/10

TalentedCheese863 13 Mar
Great mod, would love if you could mod trophy score though. Very simple to use compared to my diamond and rares mod which involves copy and pasting code and messing with game files, where as this one you just download and play.

irocubabe 9 Mar
All the cheats I used work though the speed cheat is a bit too fast i would love like a slider to control HOW much faster... it also seems to anger my mouse cause i have to disconnect and reconnect to get it to work right after using the speed cheat. <3 thanks for this great trainer :)

RelativeBird793 9 Mar
I played for hours without finding not one animal. I put silent on as to not take too much out of the game. Just perfect. Thank you!

CheerfulHotkey990 2 Mar
Hey man, you did a really good job with this but there's just one thing I would like you to add (Actually a little more than one but this one stands out to me) do you think you could add night vision, either making it to where you can see tracks clearly without the headlamp or either making it to where it looks day but it's actually night. If you could do this it would be greatly appreciated. Thanks!

BradyBaby 28 Feb
i am able to catch up with the progress i had on xbox, would be nice if you could up the rates of higher ranked animals gold/diamonds, but this is awesome

CheerfulAvocado515 23 Feb
it works awsome, would be even better if there was a highlight mod added that extended highlight time for the animals. So if one happens to run away, you know where it went.

InvisibleBranch242 18 Feb
This is hands down the best cheating client ever! Super easy to use! Lots of different cheats and extensions. Best ever! Thanks bro :D

niggcoin 17 Feb
I really enjoy this mod , i wish it had more options like to spawn animals in with the rare fur types but= this mod as of right now is really nice

WokeAlarm844 8 Feb
Thank you STINGER this mod has helped me so much. However, I would love for there to be some sort of thing where it auto highlights all animals near you and have no bullet drop or you can make a thing where it turns all animals into large diamonds. But, overall I have no issues except for a few crashes here and there.